Franco Finn, the first and only Filipino hype man in the NBA, has been the life of the Golden State Warriors' party for two decades. There’s a certain level of energy that he constantly needs to keep. He’s in a perpetual state of all caps, riddled with at least three exclamation points, in bold font.

A lot of that comes with the job. Franco, by day, double-hats as an auctioneer and an employee of an airline company. But by game night, like some sort of superhero, Franco puts on his white sunglasses and sports jacket, takes hold of a microphone, and makes things pop.

He clears his throat and channels a deeper timbre of his voice. Deep enough and loud enough to execute WWE-style intros and call-and-response chants in front of 20,000 people. He’s the man on the mic, uniting Dub Nation with a rallying cry.

That’s what Franco has been doing for the past 20 years as the hype man for the Golden State Warriors.

His accent is undoubtedly American, but he’s a full-blooded Filipino who was born and raised in the U.S. His mother was a part of the wave of immigrants who sought the American dream in the 1970s. It was through his mother—a Warriors lifer—that he discovered his love for basketball.

She watched as Rick Barry led the Warriors to the NBA championship in 1975. Exactly 40 years later, she watched—and unquestionably was electrified—as her son introduced the Warriors as champions once again in front of close to a million people at the championship parade in Oakland.

The Warriors' love story has gone full circle for Franco and his mother. But that wasn’t at all part of the plan. 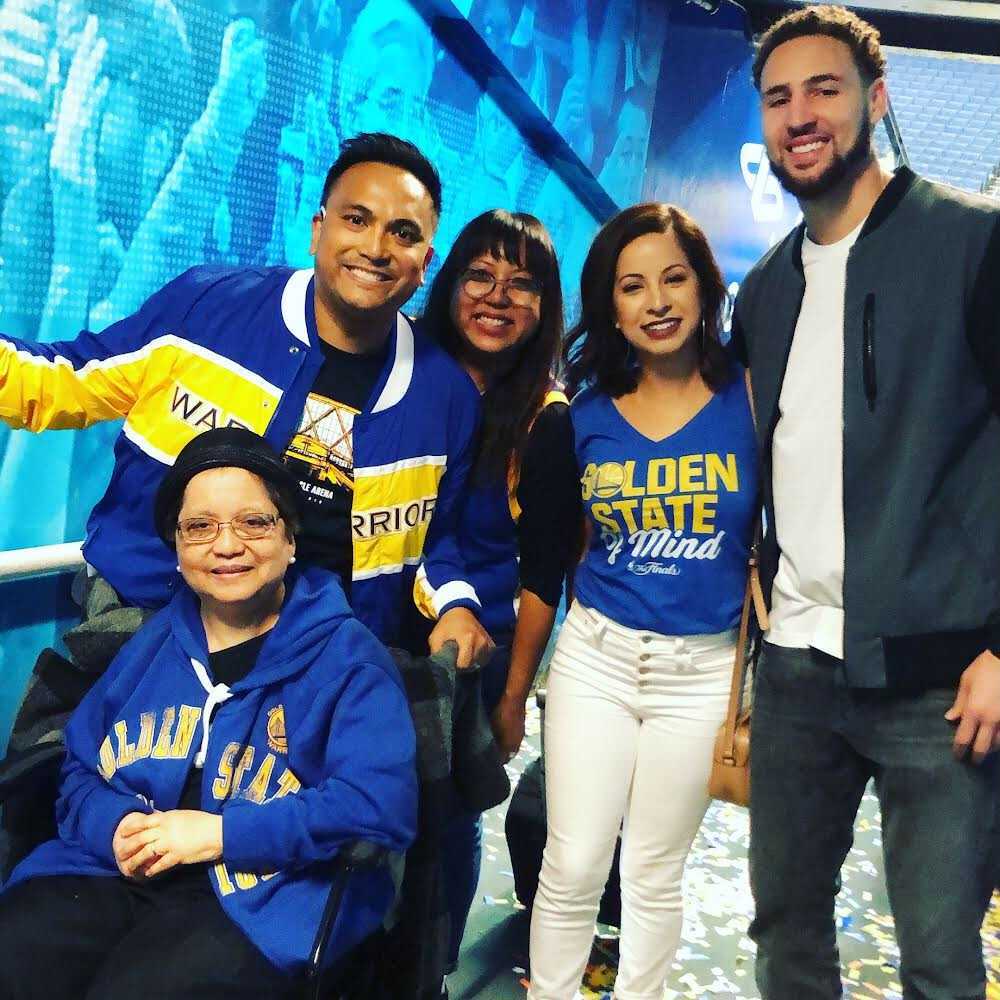 Franco grew up an only child, a bit reserved and not quite the extreme extrovert his current Warriors gig requires him to be.

“I’m either zero or a hundred with my energy,” he said.

Football was his first sport, fueling dreams of one day becoming a quarterback. His heart is with the Warriors, but he had eyes on the 49ers. His mother wouldn’t allow it. Instead, Franco focused on being a fan from a distance. He cheered on his Bay Area sports teams, all while something was brewing in the inner depths of his vocal cords.

“It was really late in life that I discovered I had a voice, a passion, and energy,” Franco said.

This holy trinity of sound landed him his first job in broadcasting and radio. He got his reps doing concerts and events as “Freestyle Franco,” his alter ego who wields the superpower of hype. Plug the mic, put him in front of a crowd, and watch him go.

That’s exactly what Freestyle Franco did in one random Hilary Duff concert in Oakland sometime in 2002. With no opening act and a long 15 minutes to kill, the packed and buzzing arena needed a bit of saving. They called on Franco.

He killed it, indeed, without even knowing there were very important people in the seats who would change the trajectory of his career, forever.

“The Warriors executives were there with their kids and they were like, ‘Man, you are a hype guy,’” said Franco. “We need your energy. The Warriors need entertainment.”

The Warriors job couldn’t have started any better for Franco: it was a losing season in Year 1. A few more losing seasons came after that, and it only made the assignment all the more valuable.

How do you hype up a bored, down, hungry-for-a-win crowd? Franco was definitely the man for that near impossible task. The losses and an elite hype man in Franco birthed the concept of “great timeout entertainment”, which was another way of keeping the fans happy without them having to check the scoreboard.

“It was the show within the show,” described Franco.

His first decade with the Warriors was a challenge. One that required extra amounts of creativity to amp up the cheers and drown out the boos. He and his team did it by giving away free cars, cash, and sandwiches. An occasional haircut was also thrown in to keep things fresh.

“Those were the best times in my life because I got to hone my craft as a hype man,” said Franco.

As the Warriors slowly figured it out on the court through the “We Believe” years up to the Steph Curry era, Franco continued to do his thing at the sidelines. His voice was getting raspier. The chants got louder. The show got bigger.

It reached a crazy point where the decibel levels at the Oracle Arena snapped. Out of the noise and smoke rose one of the most iconic arena nicknames in the NBA: the “Roaracle.” 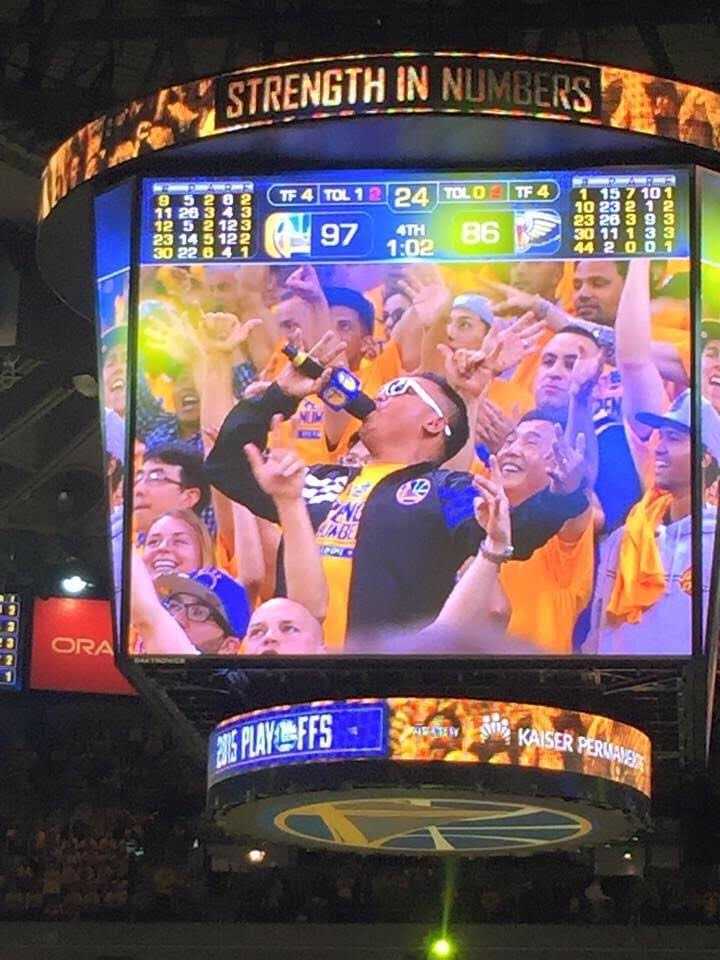 The loudest fans in the league didn’t just happen by accident. It took years of work. A lot of strategizing, planning, looking at data, improving year-by-year.

Franco won’t take all the credit, but just like Steph’s huge role in turning around the franchise, he was the catalyst who made the big plays when they counted the most.

He takes the hype man craft seriously. The Warriors’ culture of insane work ethic and laser-focused attention to details aren’t exclusive to the 48-minute show. It’s also injected into the show within the show.

“The players are working, they’re shooting, they have a game. I have a game, too. I’m reading notes, I’m writing things, I’m doing voice recordings,” said Franco.

He’s aware that the Steph Currys and the Klay Thompsons feed off of the fans’ energy. As the front-facing man with the microphone, he is the franchise player, the point guard, the go-to scorer, and the glue guy all rolled into one.

His motivation? Getting the fans pumped up. Or, perhaps to be more accurate, pump blood into the veins of the fans. If the fans give life to the game, then Franco is most definitely the heart doing the work.

“My voice is translated to these fans,” he said.

When Steph is knocking 3s from the logo and Franco’s voice resonates at the perfect moment, the Warriors fan experience gets on a level that can only be described as euphoric.

Twenty years in, Franco has been through countless rosters, heartaches, and 3-1 jokes. He’s also partied like a champ three times and he’s expecting more. He’s living the dream. Volume all the way up.

But he hasn’t drifted away from what got him there in the first place.

“In the end, what makes me happy is that I helped fulfill my mom’s American dream here in the States. I hope I can be an ambassador for basketball, for being a host, an emcee, a hype man, an entertainer, however it may be to inspire youth, especially in the Philippines, who may not realize that this is a possibility,” Franco said.

The thing with Franco is that he can be roaring when needed, but making loud noises isn’t the whole point. It’s what he’s doing in silence, when things are muted, the arena is empty, mic unplugged, and he’s thinking about the future.

Being the league’s first and only Filipino hype man will have its own set of perks and burdens. The huge responsibility and influence that come with it—that’s something Franco doesn’t take likely. It’s what keeps him hyped, still. Always.