Golden State says Curry 'may return' to team practices this week and his status for Game 1 vs. Denver remains 'undetermined.' 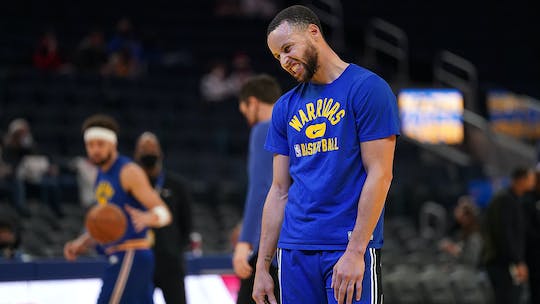 Golden State Warriors guard Stephen Curry continues to make progress as he rehabilitates from a foot injury and his status to return for Game 1 of Golden State’s first-round series vs. the Denver Nuggets remains undetermined, the team announced on Tuesday.

According to the team, Curry returned to individual on-court activities last week and “may return” to full team practices this week. His availability for Game 1 vs. Denver on Saturday (8:30 ET, ABC) “will be based on his continued progress.” Curry has been sidelined since March 16 with a sprained ligament and bone bruise in his left foot.

Coach Steve Kerr described Curry as “day-to-day” during his media availability on Tuesday.

The Warriors posted a 1-6 record without Curry from March 20-30, then finished the season on a five-game winning streak to secure the No. 3 seed in the Western Conference.

Curry finished the regular season with averages of 25.5 points, 6.3 assists and 5.2 rebounds over 64 games.