What happens when a young NBA fan watches the '98 All-Star Game for the first time? Let's look back at the classic showdown, which served as the passing of the torch from one generation of legends (and fans) to the next. 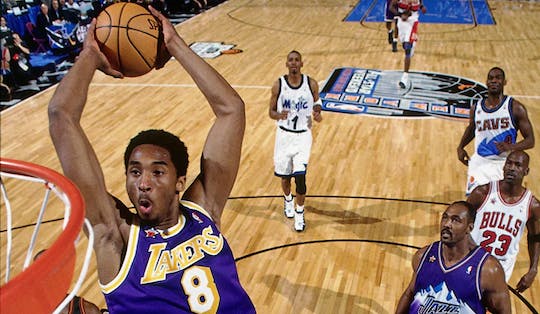 Kobe Bryant was the youngest All-Star in NBA history.

Michael Jordan, dropping hints about calling it quits, is at the world’s most famous arena to play in his 12th All-Star Game. A 19-year-old “little Laker boy” named Kobe Bryant, who’s starting in his first All-Star Game, is going at MJ every chance he gets.

In the end, Jordan won MVP, scoring 23 points, grabbing six rebounds, and dishing out eight assists. Kobe, meanwhile, led the West All-Stars with 18 points and a bunch of memorable moments that are still electrifying to watch to this day.

The year 1998 was when Jordan was crowned MVP for the last time in his career and his Chicago Bulls copped their last championship. In many ways, ‘98 was the passing of the torch, from the legends like Jordan, Karl Malone, and David Robinson to the legends-to-be like Kobe, Kevin Garnett, and Tim Duncan.

The year 1998 was also the year the youngest writer of NBA.com Philippines, Renee Ticzon, was born. Joined by another NBA.com Philippines writer, Jon Rodriguez (who definitely was not born in 1998), she watched the 1998 All-Star Game for the first time in 2021.

Jon: Going into the rewatch of a game that happened when you were exactly zero years old, what were your pregame thoughts?

Renee: Obviously I’m looking at this with fresh eyes. I’ve never watched the full game before, but I’ve seen a lot of throwback snippets. I wanted to try and see how different the game is played now versus in ’98, and there was a whole lot. Plus, I was trying to name as many players as I know. I could only name a few.

J: “The rest” are waving. So watching the first few possessions, what stood out for you?

R: I noticed how there were so many isolation plays. At one point, it got boring because the game got a little bit predictable. I heard that illegal defense was such a big thing before to cater to these iso plays, but that just doesn’t appeal to me.

J: Heard of Iso Joe? You won’t like him either.

J: One thing that stood out for me while rewatching this, I forgot that MJ was sick (shoutout to his antibiotics), yet he dominated and played the most minutes.

R: Well, I don’t doubt it. It was mentioned pregame that he had a 101-degree fever before the game, but from my understanding, this wasn’t the first time he played sick. GOAT doing some GOAT things, I guess.

J: He wasn’t supposed to play, but maybe he just can’t and won’t pass up the opportunity to compete with 19-year-old Kobe, then the youngest starter in All-Star Game history.

J: As a Chicago Bull, yes. He played his final, final All-Star Game in ‘03 as a Washington Wizard.

R: Oh right, he went back to the NBA! Why did he do that?

J: Because at 40, he wanted to prove he still had it. GOAT doing some GOAT things.

J: There was one play where Karl Malone wanted to set a pick and roll with Kobe, but Kobe waved him off because he wanted to take on Jordan 1-on-1. I think that’s really the world’s first glimpse of Mamba Mentality.

R: Kobe was a lot better than I thought he was at 19. I knew he was good, but I didn’t really realize HOW GOOD he actually was. After what I saw today, I have a sense of why they kept saying that he was the next Michael Jordan in the NBA.

J: One of the things that really didn’t age well in this game was the fact that he was benched the whole fourth quarter.

R: Well, for me I feel like he got a lot of playing time already, so it was fair to give the other guys a chance to play too, since it is an All-Star Game, after all.

J: No to iso plays and give chance to others, got it.

Kobe Bryant vs. Michael Jordan at the 1998 #NBAAllStar Game!

All of All-Star in One Night - Sunday March 7th @NBAonTNT! pic.twitter.com/z4buS4p1tk

J: Aside from Jordan and Kobe, who’s your MVP pick?

R: Honestly, maybe Reggie? I don’t know, I was too focused on Kobe and MJ’s battle that I kind of lost sight of all the other players. But if I had to choose someone, it would be Reggie!

J: Good pick. This was a good year for Reggie and the Indiana Pacers. They were so close to reaching the finals but... Jordan happened. My pick for MVP is Eddie Jones. He jacked up 19 shots (!!!) in 25 minutes. Shoot your shot, Eddie.

J: At that time, he was the Lakers’ starting shooting guard. Kobe came off the bench. But in the All-Star Game, it was Kobe who started. There’s your motive right there.

R: I feel like the players that are familiar to me are those who broke a lot of records since the players today are being compared to those OG players. For example, I know a lot about Reggie because Steph Curry idolized him and surpassed him in 3-point shots made.

J: To that point, who do you think has that same drive like young Kobe in today’s batch of All-Stars?

R: In all honesty, their game isn’t similar, but it has to be Damian Lillard. He’s the type of player that you know wants to win no matter what. I’ve seen a lot of people in the NBA score crazy numbers night after night, but they don’t get as many wins because they stop at that. Dame, for me, is the guy who will give you those crazy numbers, but he will also show up when it counts the most.

R: Why was Reggie Miller not a starter?

J: Good question. The Pacers were the top team in the East, Larry Bird was the coach, but... Jordan happened. Would’ve been awesome if Reggie started though. Did you hear the boos when we was introduced? They love him in New York.

R: I heard that he is public enemy No. 1 in New York! They were saying it was his second home. Why is that?

J: Reggie just loved to hoop in Madison Square Garden. In ‘95, he killed the Knicks with eight straight points in nine seconds. It was wild. I highly recommend watching that clip.

R: OK, got it. Why weren’t Charles Barkley, Scottie Pippen, and Dennis Rodman part of the All-Star Game? I am really stunned.

J: I think Barkley and Pippen were out due to injuries. Rodman was probably partying in Vegas. [Editor's note: Barkley was quoted as saying that he also wanted to party in Vegas, while Pippen missed time at the start of the season due to a foot surgery.]

R: Please don’t judge me. What is the Seattle Supersonics? When, why, where???

J: Before there was OKC Thunder, there was Seattle Supersonics.

J: The team relocated to Oklahoma City during Kevin Durant’s first years in the NBA.

J: But KD started as a Sonic.

There it is, two different perspectives from two different generations, which—in hindsight—is exactly what the 1998 All-Star Game offered. On one end was the 90s brand of basketball dominated by Jordan; on the other was the new breed of superstars ready to take over the league.

Right smack in the middle of all that was this classic game in New York, a basketball artifact that deeply influenced today’s game. We can see Kobe’s drive in Dame, Reggie’s shooting in Steph, and so on.

This game is 23 years old, yet it still has a huge ripple effect—both to 90s fans embracing tito- and tita-hood and to fans who were too young for the Seattle Supersonics.