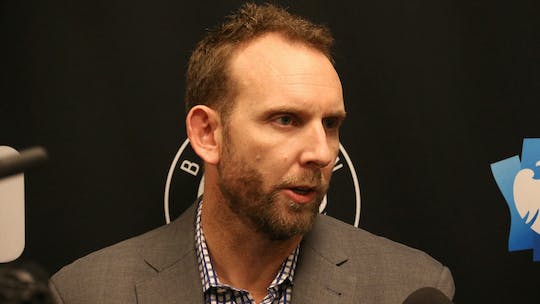 NEW YORK (AP) — The Brooklyn Nets no longer needed to wait for Kevin Durant to get healthy, or for Kyrie Irving to get vaccinated, or for James Harden to make a decision about free agency.

It already seemed clear Brooklyn’s Big Three was never going to be what was hoped.

“If we realize this is not going to work, short-term or long-term, then it’s time to say for both parties involved, this is better off,” general manager Sean Marks said.

Marks made the biggest move of the NBA’s trade deadline day Thursday when he sent Harden to Philadelphia as part of a package for Ben Simmons, Seth Curry and Andre Drummond. He said talks came together quickly with 76ers counterpart Daryl Morey in recent days.

The trade ended the teaming of Durant, Irving and Harden after they played just 16 games — only two this season. The Nets have dropped 10 straight, with Durant sidelined by a sprained knee ligament and Harden sitting at the end with hamstring tightness.

Perhaps they would have pulled out of their slump when the superstars were healthy, but it became easy to wonder if that would ever happen for a long stretch.

“When you look at the whole thing in its entirety, and that’s probably one of the most frustrating things that we’ve had to deal with over the course of the last year since James has been here, is to be quite frank, the Big Three, quote-unquote, haven’t had significant time to play together for a variety of different circumstances,” Marks said. “So, I think the frustration is more in that than in eight or nine games.

“Obviously it was not, and it currently still isn’t, trending in the right direction, but we’re not going to make a decision off of one or two, five games, whatever it may be. The sample size has to be bigger. And at that point, we’re sitting here saying, ‘Yup. We’ve seen enough.’”

Same with Harden, who Marks said was honest in conversations with him and owner Joe Tsai. The All-Star guard could have become a free agent this summer and is still searching for his first NBA title.

Apparently, all sides concluded it wasn’t going to happen in Brooklyn.

“I think it’s just a feeling. It’s a feeling when you know, look, this is not working, whether it’s on the court, off the court, for a variety of different circumstances,” Marks said.

“It’s not like neither side did not want this to work. It was more a sense of, look, this is the right time and it’s the right thing to do is to move on now. James has been upfront from Day One. The clock is ticking for him. He wants to win a championship and we do, too. If he feels like this was not the right place to win a championship and we felt like we could continue to with our goals of being that last team standing by making a trade, that’s why we made the deal.”

Marks wouldn’t get into specifics of his conversations with Harden, including whether frustration with Irving caused his unhappiness. The guard isn’t able to play in home games because he hasn’t been vaccinated against the coronavirus, as mandated for New York’s pro athletes. The Nets originally decided not to play Irving at all until he could play in all their games, but brought him back part-time in December.

“Look, I don’t want to speak for James on that,” Marks said. “That was never explicitly expressed from him. I think the most frustrated person in this whole thing is Kyrie. I mean, Kyrie is frustrated with the fact that he’s not able to be out there.”

Simmons hasn’t played this season after telling the 76ers he wanted to be traded. He was getting his physicals done Friday but Marks didn’t want to predict when the former No. 1 pick would be ready to play.

When he is, perhaps he turns into the final piece that Harden was supposed to be when he arrived in Brooklyn just 13 months ago.

“He’s a hell of a player, without a doubt,” Marks said. “Again, these are not easy decisions. We’re very grateful for what James has done over his short time here, but at the same time adding these three players — Seth, Andre and Ben — help us in needs James doesn’t fulfill.”