Catch the 2021 NBA All-Star on One Sports or NBA TV Philippines on Cignal on Monday, March 8, beginning at 7:30AM. 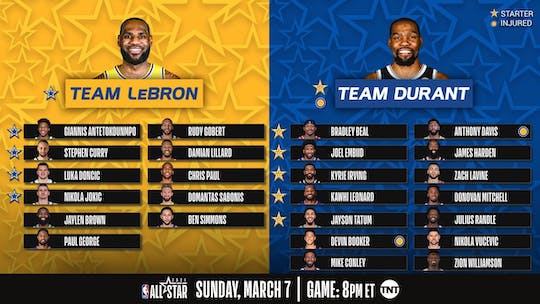 A lot has been taken away from us since last year, but at least one thing is coming back this 2021: the annual All-Star weekend, which promises to be a celebration of the NBA’s biggest stars.

The All-Star events being crammed in one day seems daunting, but given the state of the world, it’s prudent and maybe even revolutionary. Last year, the All-Star game had a thrilling finish thanks to the Elam Ending. Maybe after this year, we'll start holding All-Star events in one day to leave more time for the league's superstars to rest.

One Sports and NBA TV Philippines on Cignal will air the NBA All-Star 2021 on March 8. The Taco Bell® Skills Challenge and the MTN DEW® 3-Point Contest will start at 7:30 AM. The NBA All-Star Game coverage will begin at 9:00 AM, with the AT&T Slam Dunk taking place at halftime.

One of the most underrated events of All-Star weekend, the Skills Challenge really took off when they started inviting bigs in 2016. Since then, centers Kristaps Porzingis, Karl Anthony Towns, and Bam Adebayo have conquered the field.

The recent history of this competition has shown that it all boils down to two of the obstacles: the pass through the hoop and the 3-point shot from the top of the arc to finish the course. The rest of the obstacles are mostly speed-based, so guards like Paul and Doncic should have a distinct advantage. But don't underestimate bigs like Randle and Vucevic who can stroke the closing three-pointer with ease. This should be a fun event, overall, especially if another big comes out and smokes the field.

The 3-point shootout has become the highlight of most All-Star Saturdays, and this year, we have a field consisting of a former winner and a bunch of guys having career years in shooting from distance either in terms of efficiency or attempts.

Curry should be the favorite, having already won the event in 2015. Experience counts in this event since players don't normally practice shooting how the contest is set up. Numerous participants have talked about this before. Players don’t practice shooting off racks and usually do their drills with in-game scenarios in mind.

With that said, this contest tends to be very random. Some of the league's historically great shooters suffer from unfortunate cold stretches during the event, while a lot of underdogs have taken a heat check all the way to a championship.

Curry already has a tried and tested system for the 3-point contest and is looking to become the fifth player with two titles in the event after Mark Price, Jeff Hornacek, Jeff Kapono, and Peja Stojakovic. But really, anyone can take home the trophy if the ball bounces their way.

After an eventful finish to last year's dunk contest, this year's field consists of three newcomers.

While the competition will not feature a human wrecking ball in Zion Williamson, or any of the past favorites like Aaron Gordon, Zach LaVine, and Terrence Ross, don't count this year's contest out yet. Simons and Stanley participated in two of the wildest high school dunk contests, while Obi Toppin once threw down an in-game, between-the-legs dunk in college.

What makes dunk contests exciting is the creativity. You'd think that with the advent of YouTube dunkers, we have already seen every dunk there is, but there’s still plenty of airspace for brave frontiersmen.

If last year's game was any indication, the Elam Ending has totally changed the All-Star Game. Just when the game turned into a no-defense pickup game, the Elam Ending came along and gave each quarter stakes and drastically amped up the intensity of the fourth quarter.

This year, LeBron and KD drafted very interesting teams. LeBron seemed to have drafted a more all-around team, while KD has a team full of what NBA Twitter loves to call BUCKETS or HOOPERS.

Team LeBron has two of the league's flashiest passers in Luka Doncic and Nikola Jokic while Team KD has two guys that will for sure throw down a ridiculous dunk in LaVine and Zion.

What's always been interesting about All-Star games, especially when they come down to the last few possessions, are the two teams’ endgame lineups. The starters don't necessarily finish the game. The 10 players on the court in crunch time are usually the biggest stars, the most clutch guys, or even the coach's players from their own team. In any case, the lineups are the most important part of a game with the best players painting a good picture of the league's hierarchy.

With so many bucket-getters, who'll take the big shots for Team KD? Who will Team LeBron send out to finish the game? These and a lot more pressing questions will be answered tomorrow.