What went wrong for the Celtics?

Shooting woes are just one reason why the Celtics suffered a huge loss in Game 2. 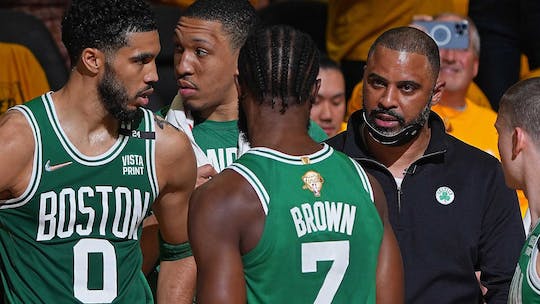 The Boston Celtics fell short in Game 2 of the 2022 NBA Finals against the Golden State Warriors. While it isn’t surprising that the young team crumbled against seasoned veterans, no one expected Game 2 to turn out the way it did. The Warriors won, 107-88, to tie the series at 1-1 before the shifts to Boston.

Jayson Tatum had a decent scoring night with 28 points and six rebounds, but he was a –36 (plus/minus) and only had three assists.

After a crazy win in Game 1, the Celtics crumbled under pressure as the Warriors made major adjustments.

For one, Boston was unable to guard Stephen Curry. The Celtics left him wide open on a couple of transition plays, letting him knock down 3s with ease. He saw the young team was unable to catch up with Golden State’s quick pace so he confused Boston’s defense on switches. Curry ended the night with 29 points, going 5-of-12 from beyond the arc.

It was also a bad shooting night for the Celtics in general – five players shot 30 percent and below. Jaylen Brown, Derrick White, and Tatum were the only players who cracked double-digit scoring. Boston’s shooting woes were extremely prominent in the third quarter, where it managed to make just four field-goal attempts. That’s the same number of field goals Curry made in that quarter. The Celtics ended the quarter down by 23 points.

“I think tonight turnovers and I think sometimes letting our offense affect how we defend. We were a little stagnant in the third quarter, and I feel like it translated on the defensive end. They got going and hitting shots and things like that,” said Tatum.

Then there was the 16-point difference in the paint. Half of the Celtics’ made baskets were from the 3-point area as they struggled to hit shots within the arc. The Celtics also had 19 turnovers which the Warriors converted to 33 points.

“We look at it as a disappointing loss in Game 2, a game we didn't play up to our potential and our standard. Regardless of what happened in Game 1, that's behind us. We had opportunities,” said head coach Ime Udoka.

However, what’s good about having a young team that has already gone through so much adversity numerous times before, is that they build resilience that helps them through times like this. They will have to realign, make some adjustments, and try to get a win at home and move closer to the title.