Why Sabrina Ionescu is a legend in the making

Sabrina Ionescu has cemented herself in the NCAA record books. Now it's her chance to do the same in the WNBA. 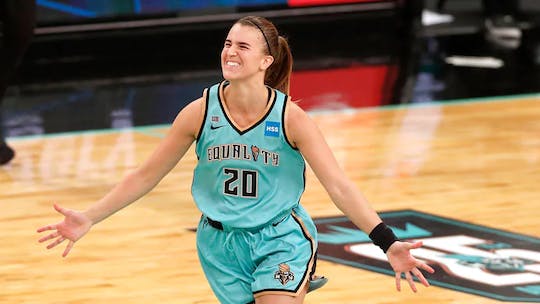 Sabrina Ionescu was a known triple-double machine in college.

Just last week, she became the youngest WNBA player to record a triple-double. It was not only the first in the New York Liberty franchise history, but also the fastest in league history. Ionescu achieved the feat in only her sixth game in the pros, posting 26 points, 10 rebounds, and 12 assists against the Minnesota Lynx.

After being selected No. 1 overall in the 2020 WNBA draft, Ionescu showed a lot of promise as a rookie. Unfortunately, she only got to play three games before she came down with a season-ending ankle injury.

Now in her second year with the Liberty, she’s averaging 17.8 points, 6.8 rebounds, and 7.8 assists – a stellar statline that’s making WNBA fans excited about what’s in store for the young superstar’s comeback season.

With so much talent in the WNBA, it’s valid to wonder if Ionescu can really hold her own and become one of the greats down the road. Does she have what it takes to be a league MVP or a franchise player?

Let me set the record straight: I don’t think Ionescu will be stepping out of the spotlight anytime soon, and I’ll tell you why.

Growing up with siblings will make you competitive, it’s just a fact. Ionescu grew up with two brothers who never took it easy on her and that’s exactly how she treats every opponent she’s up against. Competitive people are intense, but Ionescu is on another level.

While some players focus on shooting the ball well or being a great rebounder, Ionescu competes in every aspect possible. She is a gifted natural scorer, but she also wants to grab every rebound and set up her teammates for quick, easy buckets. At the college level, it’s ridiculously difficult to do all those things, yet she did it so gracefully and she’s brought the same energy into the WNBA.

Then there’s Ionescu’s desire to win. There’s a fire that will never go dark and her teammates understand the need to match that passion. She’s the type of person to criticize you for slacking off, but will always be the first to celebrate your achievements.

When you see someone work so hard to become the best, you feel obligated to follow in their footsteps and that’s what creates a deadly team environment. Ionescu transformed Oregon into a national championship contender and she’s on track to do the same for the Liberty.

“I’m excited, but I think I’m more excited that we got the win. It really takes a whole team effort. It’s not just me,” she said after her triple-double game. “We believe in ourselves, we believe in this organization and what we’re building here. I think it’s a testament to how hard we’re playing, how we’re playing for one another. So I’m really excited, but it doesn’t stop here. We’re gonna keep going.”

That’s simply how Ionescu is built. She doesn’t have an off button. She is always on every moment she steps on the court.

Ionescu shared an awesome relationship with NBA legend Kobe Bryant, born out of their desire to elevate women’s basketball. Both generational players had the mindset and obsession to be great.

Like Kobe, Ionescu is so obsessed with elevating her game that coaches need to monitor her time on the court, otherwise she would never leave it. Yeah, you may think that’s being blown out of proportion, but that’s truly how Ionescu is wired. She will obsess over losses and nitpick missed opportunities. Like Kobe, she embodies Mamba Mentality.

If she’s running through drills and her shot goes in but it feels wrong, she will obsess over every detail until it’s perfect -- the backspin, the release, the arc, everything has to be perfect.

When you naturally possess that kind of attention to detail, you can drive yourself crazy before you’re even satisfied, and Ionescu is rarely satisfied. So when you see her drain a 3 to tie the game and hit both free throws to win it, that’s not luck, that’s hours spent during practice obsessing about every nuance that goes into shooting a ball and making sure it goes in. And it never stops.

If you ask Ionescu what she needs to work on, she’ll likely say everything and more. She doesn’t buy into her hype and that’s what separates the good players from the legendary ones.

Everyone sees Ionescu’s finesse on the court. Her demeanor and swag can fool the community into thinking that she’s never felt anxious a day in her life. Little do fans know, Ionescu has had days where she could barely sleep or eat anything prior to tipoff. Her confidence and readiness seem impossible on such a big stage, but it's unchanging.

Like many of us athletes, she gets extremely anxious before games. The difference is she never shows it no matter who she’s up against. Ionescu has the mental toughness beyond her years and it’s hard not to notice.

Her dad describes her as "settled back, very calculated, very in control of her emotions" in a 2018 interview with The Oregonian. She can see through every angle, every gap in the defense and all these ideas on how to demolish teams, yet she remains completely calm while performing.

Do you know how hard it is to score, rebound, and assist in double-digits, all while being 5’11”? I do, and it’s insanely hard!

Right after Ionescu broke the NCAA triple-double record three years ago, she made it clear that she’s not concerned about individual records. She’s just focused on winning and helping her team grow. Yet the opportunity to break records just keeps on coming. And here in the WNBA, she’s just getting started.

Ionescu’s relentlessness allows her to do all those things, and with poise too. It’s not often you get to witness a player with jaw-dropping skills and next-level composure, mixed in with swagger and humility.

Those players are once-in-a-lifetime talents. That’s why there’s no doubt in my mind that Sabrina Ionescu will dominate the league for years to come.