Why Suns-Bucks Finals matchup is good for the league

They are not the Finals contenders that NBA fans are familiar with but it's refreshing to see new stars compete on the biggest stage. 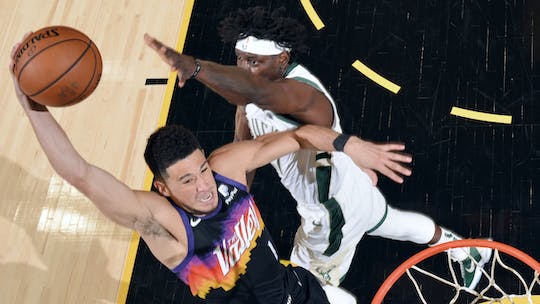 It's human nature to cling on to things that are familiar, though what's familiar isn’t always what's best for us, or in this case, what’s best for business.

From the moment Kevin Durant and the Brooklyn Nets were eliminated from this year’s playoffs, there was already equal parts excitement and anxiety. None of the franchises left in the respective Conference Finals had made the NBA Finals in at least 20 years. Someone new was going to be crowned champion. Someone not named LeBron James, Steph Curry, or Kevin Durant was going to be the main draw of the Finals.

The collective NBA fanbase wasn't going to have their safety blankets of LeBron hot takes, #StephBetter tweets, or general Kevin Durant nuttiness to spew once the Finals came around. It was almost as if no one knew how to talk about the NBA or basketball without making comparisons or references to their most loved/hated stars.

So the rationalizations came: the Phoenix Suns and Milwaukee Bucks both just lucked into the Finals, mostly because they’re the only ones who went through the playoffs without injuries to their stars. There was talk about how they were both small market teams that were not going to draw the numbers needed for the NBA to return to its pre-pandemic state, as if fans should care about ratings.

There’s a whole side to this conversation that has been understated: the NBA is the least random of the three major US sports purely because of how the top stars consistently reach the Finals. So for the NBA, new is always welcome. In some parts of its history, new was highly sought after.

Take the league in the late ‘90s. Michael Jordan, the NBA’s (maybe even America's) most dominant cultural force, was hinting at a second retirement. The NBA pushed to find the next Jordan: the next star to hitch their wagon on for the next decade. They got a few candidates in Penny Hardaway, Grant Hill, and Michael Finley, but none of them panned out due to injury or lack of ability or a mix of both.

Once the new millennium came around, it was clear that there was no new Jordan, so the league continued its state of limbo. It was great that the Los Angeles Lakers won championships and rekindled their global fanbase. But the league still didn't have their Jordan.

It wasn’t until 2003 that the league brought in a new monolith – LeBron James. Along with LeBron's rise, Kobe Bryant’s quest to spread the word of Mamba Mentality became the league’s new draw. The two ushered in a brand new era in the NBA's quest for global supremacy under David Stern. They never met in the Finals, but from 2007 to 2018 the NBA Finals featured either LeBron James or Kobe Bryant.

Up to now with LeBron entering Year 19 of his career, the league still leans on LeBron as the compass entering new horizons. From social media to embracing their players' activism, the NBA has looked at LeBron as its captain.

This Finals is a preview of the post-LeBron NBA. On one side, we have the Suns and Devin Booker. Phoenix has long been the laughing stock of the league, until this year when they caught lightning in a bottle. They’re trying to finally win a championship and stay relevant for a long period. Booker is the perfect star for the Gen Z and young millennial crowd – a Kobe disciple that's just as likely to end up on a GQ cover as he is to be in a TMZ article.

On the other hand, we have the Bucks and Giannis Antetokounmpo. As a franchise, the Bucks have been content to be in the middle of the pack as a low playoff seed or late lottery picker, until Giannis forced them to think bigger.

Antetokounmpo himself is a product of the NBA global agenda 40 years in the making. What was just Stern’s pipe dream to avoid competing locally with the NFL and MLB by touching the untapped international market had turned into the league turning young basketball players outside the US into dreamers. Giannis was one of those dreamers – probably the most improbable superstar the NBA has produced.

If Giannis represents the NBA's globalization, Booker is the product of its progressive thinking and younger audience – both key agendas other North American leagues are only now tackling. While the league may still rely on LeBron until he retires, this NBA Finals should tell us that the kids are alright.

The NBA is growing and has nurtured an environment where it has many young stars in Luka Doncic, Trae Young, Zion Williamson, LaMelo Ball and many others who are ready to take the wheel when the keys are handed to them. Don’t believe the panic. There’s more to caring about the league than paying attention to ratings.