Why the Lakers are a good fit for Andre Drummond

Andre Drummond can not only help the Lakers stay afloat with LeBron James and Anthony Davis out, but his presence boosts the team's chances of defending the title. 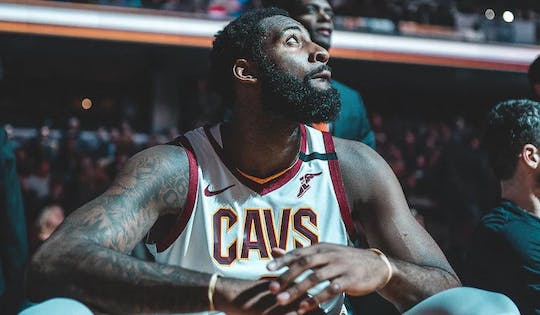 What you think about Andre Drummond says a lot about you as an NBA fan.

Traditional stats paint Drummond as a two-way machine. In the 2018-19 season—his best year in the NBA—Drummond was key to the Detroit Pistons' run to the eighth seed, averaging 17.3 points, 15.6 rebounds, 1.7 steals, and 1.7 blocks. This year in what has been the most tumultuous season for Drummond, he still put up 17.5 points, 13.5 rebounds, 1.6 steals, and 1.2 blocks per game for the Cleveland Cavaliers.

Those who've strayed into enough reddit threads, listened to enough NBA podcasts, or watched a few episodes of Shaqtin’ a Fool have, putting it lightly, tempered views on Drummond. Although Drummond puts up monstrous rebounding numbers, he barely gets contested rebounds shown in how his past teams' rebounding numbers barely change without him on the floor. For a seven-footer who shoots mostly around the basket, Drummond's 47.4 percent field-goal percentage this season is horrid.

Maybe for these reasons or others, the Cavaliers decided to buy out Drummond. This season has featured a particularly star-studded buyout market. Detroit let an aging Blake Griffin out of the remaining year and a half of his deal. The San Antonio Spurs decided that a creaky LaMarcus Aldridge doesn’t fit their youth movement. Oft-injured DeMarcus Cousins still looms as a free agent after leaving the Houston Rockets earlier this season.

Drummond is neither old nor injury-prone, but the Cavaliers decided he couldn’t be a part of their rebuild. In fact, teams weren’t willing to trade for Drummond, even if he was young and productive, hence the buyout. Twenty years ago, Drummond would have been one of the top players in the league. But now, with the game phasing out post-heavy play and emphasizing skill and versatility, having Drummond is like owning a Hummer.

That says a lot about the Los Angeles Lakers.

LeBron James has been praised for a multitude of reasons, all of which valid. Perhaps one skill that has shined with James since winning a championship with Cleveland and Los Angeles is the strength of his leadership. The culture LeBron brings to a team is so strong that he won a championship with Kyrie Irving and J.R. Smith with the Cavs.

Last year, the Lakers put quite an eclectic cast for their championship run. They had Connect Four savant Rajon Rondo, proud snake owner Dwight Howard, Gen Z poster boy Kyle Kuzma, vlogger Javale McGee, the philosopher behind “Men lie, Women Lie, Buckets don't” Dion Waiters, and the aforementioned shirt-phobic Smith on the same team. Other teams wouldn’t even risk having one of those players on their team.

But the Lakers with LeBron, Anthony Davis, and head coach Frank Vogel had a strong enough culture to keep the team together and focused on winning a championship. Through winning and losing streaks, the Lakers avoided any off-court mishap that would be expected of such a colorful group.

Signing Drummond this year came out of need. Never mind the looming threat of the All-Star team the Brooklyn Nets built, the Lakers have been decimated by injuries. Davis is only now starting on-court activities. James is still out for at least a month. Marc Gasol, a key off-season signing, has just come back from battling COVID-19.

Drummond gets to come in for a Lakers team needing all his flashy numbers for the meantime. The Lakers are currently fourth in the West with a 29-17 record. They’re going to need to stay afloat until Davis and James come back. Los Angeles has been able to maintain their defensive intensity without their stars, but the offense has predictably suffered.

For all the warts he’s accumulated over the last two seasons, Drummond can still be an impactful player on both ends. When he’s locked in, Drummond is a beast in pick-and-rolls as a finisher and as a passer on the roll. He has also low-key become a willing passing hub through hand-offs, where he's collected most of the 2.6 assists per game he's averaged over the last two years.

A focused Drummond could mean a terror of a partner for Dennis Schröeder for the short term and for LeBron when he gets healthy. Davis has also shown he can work with the spacing of having a ring-bound center on the floor. A Davis and Drummond tandem could also result in monumental offensive rebounding rates.

That is the best-case scenario for Drummond. Gasol is still a good post defender, who hustles and communicates. However, he's lost more than a step from his time as a defensive anchor. Drummond could start and end games for a complete Lakers lineup, depending if he can assimilate into the Lakers defensive ethos.

Realistically, Drummond should be a better version of what the Lakers got from Dwight Howard last year. Howard completely shed all desire for post touches and became almost exclusively a roll threat off the bench. Against the Denver Nuggets in the Western Conference Finals, Howard was a nuisance for Nikola Jokic. The Lakers extracted all the remaining athleticism and physicality from Howard, resulting in a title for LA and a career renaissance for a player that had been waived thrice before last season.

Drummond hasn't had the same rollercoaster journey as Howard, but he is also at a crossroads in his career. Drummond is on an expiring deal. He could very well be out of the league after this season. He could also adapt his game for a contender, become a champion, earn a longer contract, and prosper in the league as a veteran.

The urgency of their current situation and the strength of their culture give the Lakers the confidence to offer these types of auditions for discarded players. LeBron and AD are still going to do the heavy lifting in the playoffs. It's up to Drummond if he's going to offer a push or a pull.