Who are the best shooting guards heading into the 2022-2023 NBA season? All-Star Analyst Willie Wilson makes his picks. 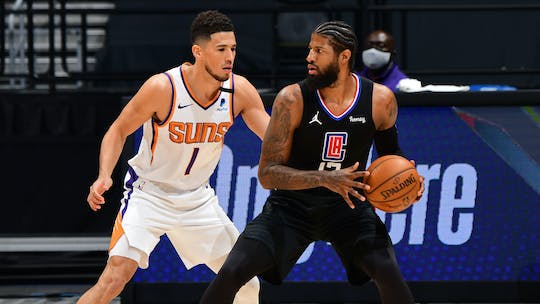 From a Most Improved Player award winner to a first time All-NBA member to bonafide All-Stars, my shooting guard list is loaded with unquestioned superstars.

Once considered the primary scorer, a shooting guard’s only job description was to score the basketball. However, that is a thing of the past. Today’s shooting guard must have the ability to run the team’s offense, while contributing on the glass both offensively and defensively.

To make it on my list, the shooting guard must be a two-way player, able to defend their position well. With that said, here are my top shooting guards in the NBA.

Mitchell is a three-time All-Star who can score from anywhere on the court. Mitchell’s highlight dunks and stepback 3-point shots are staples of his game. Whether he stays in Utah or gets traded elsewhere, I’m confident he’ll remain his usual, explosive self, getting buckets for whatever team he’s playing on.

LaVine shared the court with two All-Stars last year and still had a great individual season as the focal point of Chicago’s offense. He made his first trip to the NBA postseason, leading the Bulls to their first playoff appearance in four years. The two-time All-Star will continue scoring from all three levels with his smooth moves and outstanding athleticism.

Once again, Brown is the subject of trade rumors. The six-year vet has to put up with questions about his future with the Celtics, and whether or not his pairing with Jayson Tatum can be successful as the two are too similar in play style. Even after helping the Celtics come within two games of raising banner No. 18, Boston is still rumored to have offered Brown to the Brooklyn Nets in exchange for Kevin Durant.

The Golden Bear alum is one of the hardest working players in the NBA and it shows in the steady climb of his numbers, as well as the additional array of moves he has in his arsenal. The athletic wing can drop an efficient 30 points with a combination of isolations, ball-screen play, and spot-up outside shots. He’s proven that he can score at all three levels.

Additionally, Brown remains one of the best lockdown defenders in the NBA. His ability to score while guarding positions 1-4 is what makes him unique. He is a central figure in Boston’s top-ranked defense.

Brown is 1B to Tatum’s 1A, at times outperforming his All-NBA first teammate. That cements his inclusion on this list.

Number two on my list is Paul George. I consider him a shooting guard by virtue of a healthy Kawhi Leonard being back at the small forward position next season.

PG13 only saw action in 31 games last season due to injury. But in those games, he was still a game changer, putting on a clinic on how to be a two-way force. He is a seven-time All-Star, six-time All-NBA, and four- time All-Defensive team member. George is the definition of a superstar.

Paul George still takes criticism for his 2020 NBA Bubble playoff performance, but outside of that one instance, he’s been stellar all throughout. At 32 years old, he is still firmly in his prime. He is not a sidekick, but he is unquestionably Leonard’s equal on the team. This upcoming season, with Leonard coming back from an ACL injury, George might be even more important to the Clippers because we know The Klaw will manage his load throughout the regular season.

George will have to carry the team throughout those games without Leonard. I’m expecting to see consistent prime Playoff P performances all through the season. That means he’s gonna be a stat monster in all departments. He will showcase the efficient scoring from that we’ve become accustomed to seeing from him throughout his career. The passing lanes are also never safe when the former steals champion is on defense. With George and Leonard healthy, we might even see the Clippers back in the Western Conference Finals.

At the top of my list is Phoenix’s Devin Booker.

He has maintained his scoring average at around 25 to 26 points per game since 2017-18, but that is why we have to look deeper. The Kentucky Wildcat alum is still improving, shooting 38% from the 3, tying his career-high clip from beyond the arc. His rebounding and steals numbers were career-highs last season, all while committing only 2.4 turnovers a game, his lowest mark since his rookie season.

Booker has shown tremendous growth as a shot creator. He’s added new dimensions to his overflowing offensive repertoire, enabling him to score from anywhere on the court. More importantly, he is now more efficient on offense, and he’s used the energy he’s saved to improve as a defender. He was rewarded for all the improvements he’s made with his first All-NBA First Team selection, and a top five finish in the MVP race.

The three-time All-Star has formed one of the best tandems in the NBA with Chris Paul, which helped get the Suns their best win-loss record in franchise history. The Suns were viewed as championship contenders last season but ran into the Dallas Mavericks, who had other things in mind, defeating them in seven games in the second round of the playoffs. Booker and the Suns will have to answer for that playoff flameout to prove that last season wasn’t fool’s gold.

DBook is a scorer at heart with foolproof confidence and a killer instinct. He’s out to embarrass any defender in his way, and he’s mostly been successful doing that. Because of his improving all-around game, it's not hard to put Booker as my top overall shooting guard heading into next season.