All-Star Analyst Willie Wilson names his picks for the best small forwards in the NBA heading into the 2022-2023 season. 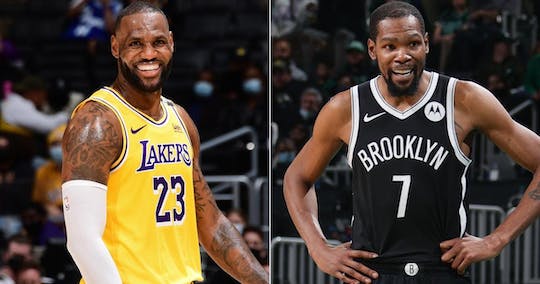 The last position group in this series is perhaps the most top-heavy position the NBA has to offer. Top-tier modern wings are the most versatile players on an NBA roster. Some of the players on my list can be considered point guards, shooting guards, or even power forwards.

To make my list, a player must be an expert in all areas of the game: scoring, rebounding, creating, and defending. At full strength, I’d say three of the players on this list can be considered the top five overall players at least, and at one point in the past few years, were in the conversation the best player in the league. With so many veterans on my list, it’ll be interesting to see which young star joins the list in a few years.

The two-time NBA Finals MVP missed the entire 2021-22 season due to injury, and in the two years since he joined the Clippers, he’s averaged only 54 games a season. At the time he went down, Leonard was making a solid case to be considered as the top player in the league. In the 2021 playoffs, an 11-game sample size, the Klaw looked like the best player on the planet.

He averaged 30.4 points, 7.7 rebounds, 4.4 assists, and 2.2 blocks with an efficient 57/39/88 shooting splits. Those numbers don’t even cover the elite-level defense he played on the other end. He’s had so much time off to recover so It will be exciting to see how close he is to 100 percent once he gets back. I expect to see peak Leonard pretty much out of the gate in 2022-23.

Jimmy Butler is a winner. Starting with the 2019-20 NBA Finals run in the bubble, the four-time All-NBA member has led Miami to the Conference Finals in two of the last three seasons. They were also one game away from another trip to the finals last season.

Butler stepped his game up in the previous postseason, improving to a 27-7-5 stat line to go with a league-best 2.1 steals on 50.6 percent shooting from the floor. While he only averaged two 3-point attempts per game, he remains automatic from the midrange area and he’s extremely crafty offensively. His best trait is his infectious confidence that rubs off on the whole organization, allowing the Heat to always overachieve. As Miami attempts to make it back to the finals, it is easy to see that the journey for the team starts and stops with the play of Jimmy Buckets.

It did not take long for Tatum to make the jump from All-Star to All-NBA player, establishing himself last season as one of the best players in the NBA.

Tatum is only 24 years old but he is already a three-time All-Star and has two All-NBA Team selections, including making the First Team last season. He’s already established himself as the face of a Celtics team fresh off an Eastern Conference title. There aren’t many ways to slow Tatum down. He’s strong and explosive when attacking the hoop. Give him space and he can exploit it with killer step-back jumpers. He has also transformed into one of the best wing defenders in the NBA contributing to Boston’s league-leading defense.

Jayson Tatum’s performance in the NBA Finals left a lot to be desired. His field goal percentage was his lowest by far during that playoff run. Although his playmaking improved during the series, he still folded when the Warriors’ number two ranked defense focused their entire game plan on stopping him. Getting a taste of the finals and coming up short, all while not playing his best basketball, is fueling the former Duke Blue Devil this offseason.

Next season, we’re going to continue seeing the tough shot-making he makes look effortless, but the area of his game I expect to see improve is the playmaking portion as evidenced by the 6.2 assists he averaged throughout last season’s playoff run. While it’s insane to think that Tatum is still at least two years away from his prime, what’s not outrageous is my expectation that he will soon be number one on this list.

What more can I say about Durant? He came into the NBA and immediately averaged 20-plus points per game on his way to winning Rookie of the Year. As a scorer, he's borderline flawless. The four-time scoring champ is a 7-foot, 38.4 percent career 3-point shooter that can score from anywhere on the floor. He recently added a lethal post-game just to keep defenses guessing. Some might call him the greatest pure scorer of all time.

Scoring isn’t the only thing he does, with almost every opponent focusing their entire defensive game plan on him, he’s routinely asked to create scoring opportunities for his teammates, especially when his other star teammates are missing. He’s truly the definition of a positionless player. He’s a future Hall of Famer and oftentimes recognized as one of the top three players in the NBA today.

Why is he only number two on my list? It’s because of the questionable decisions he’s made throughout his career. He signed with the Warriors in 2016, the same team that eliminated him from the playoffs. The same team that made history with the greatest regular season record in NBA history going 73-9. Yes, he won back-to-back Finals MVP, but most all-time greats want to drive the bus instead of being a passenger.

Thankfully, he backed off his recent trade request and now has an opportunity to get redemption from his last postseason showing after getting swept by the Celtics. The Nets are undoubtedly his team, and any success he finds there, be it team or individual, will be his without question. I expect KD to fill up the stat sheet next season, running it back with Brooklyn. However, if he continues his antics after what he did this offseason, expect this former MVP to be scrutinized even more, and his place on my list won’t be rising any higher than number two.

Many have tried to dethrone him, but James is still the King. The reported investments he routinely makes to keep his body healthy and in top shape continue to pay dividends. The 2004 Rookie of the Year is now 37 years old and hasn’t stopped showing everyone that he has many, many years left in his career.

Last season, he had his highest points per game average since he was 21. He was voted to an All-NBA Team and made the All-Star game - both of which he achieved for the 18th time in his career. Don’t expect him to play close to 82 games next season, but when he’s healthy there isn’t a player that impacts the game the way he does. On a roster built to accentuate his unique gifts, it's almost a certainty that his team will make a deep playoff run.

The Lakers’ 2021-22 season was extremely disappointing as the team dealt with constant injuries. Even with the constant changing of lineups, James put the Lakers on his back, submitting MVP-caliber performances night in and night out.

Heading into his 20th season, I don’t see him slowing down. He will continue to be the smartest player on the floor making plays for his teammates while dominating his opponents with his multitude of skills. If he has something close to the season he had last year, and the Lakers make the necessary adjustments to be better, he will be in the running for his fifth MVP, a fifth championship ring, a fifth Finals MVP, and will be giving a better argument for all of those calling him the GOAT. But, that’s an argument for another article. The question for the next few seasons is, will Father Time ever catch up with The Chosen One?

With this series, I tried to answer a question that is relative but conclusive. That’s because we all see the game differently. We all value certain aspects of the game above others. That’s what’s great about these conversations. We have an opportunity to express what we value most about the game of basketball.

After reading through my lists these past weeks, I’ve made very clear what I value most in a player: how much does that player contribute to winning?

A number of NBA players have starred in international play this past month.