Wizards guard Bradley Beal was a late scratch for a game Saturday against Miami due to the NBA's health and safety protocols. 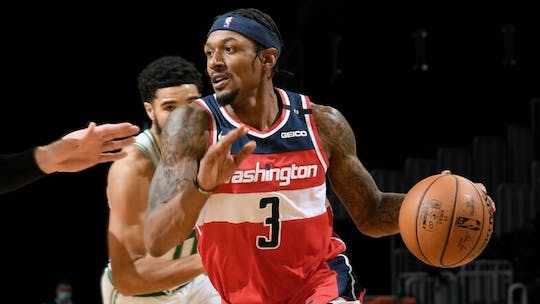 WASHINGTON (AP) — Wizards guard Bradley Beal was a late scratch for a game Saturday against Miami due to the NBA’s health and safety protocols, leaving Washington’s backcourt short-handed after Russell Westbrook was also ruled out with a quad injury.

Beal, the NBA’s leading scorer with 35.0 points per game, tied the team record with 60 in a loss at Philadelphia on Wednesday and had 41 on Friday night in a loss at Boston. The 76ers and Celtics are both missing players due to contact tracing related to positive coronavirus tests.

Brooks said Westbrook was injured Wednesday, and he credited the star guard for playing through the injury Friday.

Westbrook, who had triple-doubles in his first four games with Washington, is averaging 19.3 points, 9.7 rebounds and 11.3 assists.

Westbrook played 33 minutes in a loss Friday at Boston and was intending to play again Saturday. He’d been held out of the second half of Washington’s first two back-to-backs this season as a precaution.

Westbrook also dislocated a finger on his right hand Wednesday and played Friday with his ring and pinkie fingers taped together. He had 12 points on 4-of-16 shooting.