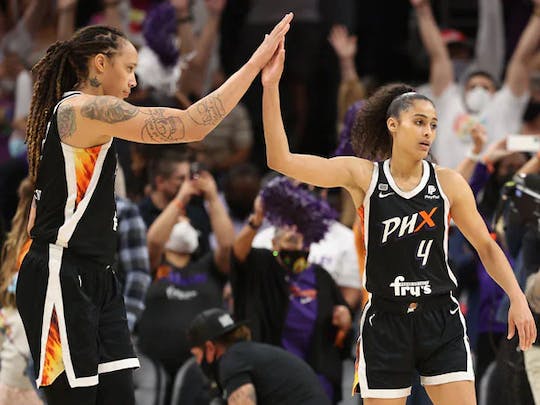 The Mercury's Big 3 starred as Phoenix outlasted the Chicago Sky, 91-86, in overtime to take Game 2 of the WNBA Finals.

With time winding down on a one-possession game, Diggins-Smith provided the knockout punch with 12.1 seconds left, sealing the victory.

Before Diggins-Smith's clutch basket, the overtime period belonged to Taurasi. She was quiet for most of the contest but came up big in the Mercury's most crucial stretch. She scored eight points in overtime (outscoring the Sky's seven), including a four-point play to start the extra session and a booming triple to give her team the lead for good.

Griner had 29 points to tie her playoff career-high and shot 12-for-19 from the field. She was aggressive to start the game and controlled the paint for Phoenix, finishing with nine rebounds and two blocks. Diggins-Smith had a solid bounce-back performance after Game 1 to tally 13 points, 12 assists, and seven rebounds. Taurasi finished with 20 points and four triples.

For the Sky, Courtney Vandersloot had numbers across the board with 20 points, 14 assists, three rebounds, and five steals, although she did commit six turnovers. The crafty point guard tied it up 79 points apiece off a tough layup to send the game into overtime. Allie Quigley added 19 points and Kahleah Copper had 15 points and nine boards.

Diggins-Smith did a little bit of everything for the Mercury. She was relentless on both ends: an attacker on offense and a disruptor on defense. If she wasn't handling scoring and playmaking duties for the Mercury, she was hounding Vandersloot.

Sophie Cunningham also deserves a mention after her return from her calf injury. She started the game and made an immediate impact on her team. The feisty sharpshooter ended up with nine points, all from downtown, alongside five rebounds and two assists. She was also instrumental in slowing down the Sky's Copper.

Phoenix head coach Sandy Brondello had nothing but high praise for her team after a hard-fought game.

A lot of NBA players pulled up for Game 2. The Portland Trail Blazers were in support of the Sky while the Phoenix Suns cheered for the Mercury.

.@trailblazers and @Suns' players are in the HOUSE for Game 2 of the Finals 👋

Shoutout to the Suns who were all-in with the home crowd. To name a few moments, Devin Booker had his camera out, Jae Crowder was dancing on the sidelines, and all of them were caught doing the wave.

The Pelicans' forward is suspended 25 games without pay after testing positive for Drostanolone and Testosterone.