WNBA Finals: Sky on the cusp of first WNBA title

The Chicago Sky clamped down on the Phoenix Mercury to move one win away from the 2021 WNBA championship. 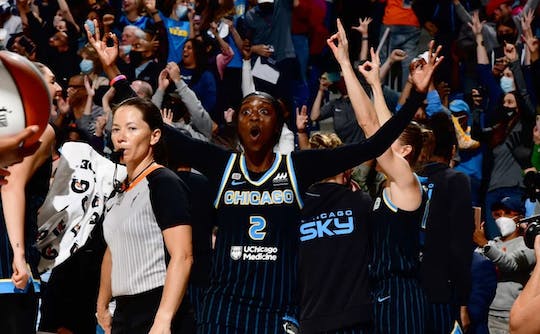 The Chicago Sky took a dominant 86-50 victory against the Phoenix Mercury in Game 3 of the 2021 WNBA Finals. The sold-out Wintrust Arena witnessed the Sky take a  2-1 lead, putting them one game away from winning the 2021 WNBA championship.

The Mercury could not find an answer for Kahleah Copper who dominated with 20 points on 6-of-8 shooting from the field in the first half. Hometown hero Candace Parker also had a big game with 13 points, four rebounds, and three assists, all while shutting down Brittney Griner.

Chicago took full control of the match, coming up with a huge 22-point lead as early as the second quarter. The Sky’s defense terrorized the Mercury, holding them down to just eight field goals and 23.5 percent shooting.

Griner finally found her groove in the third, scoring 12 points in the quarter, but she received no help from her teammates. By the time the fourth quarter rolled around, it was too late for Phoenix to even try to make a run.

Chicago has a chance to clinch the title in Game 4 on Monday at 3:00 AM.

There’s a certain level of respect for players who understand their role and stick to it. Courtney Vandersloot knows she is Chicago’s primary facilitator and playmaker, so what does she do? She dishes out 10 dimes. This is the fifth time Vandersloot went double digits in assists, three of which she did against Phoenix. Despite ending with just four points, Vandersloot’s leadership steered the Sky in their dominant victory.

Remember when Chance the Rapper tweeted this?

The Sky did their part. Time to do yours, Chance.

They call her KFC, but we call her INCREDIBLE.