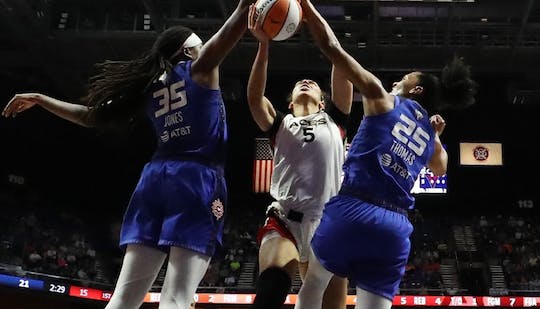 The Connecticut Sun kept their season alive and forced a Game 4 following a dominant 105-76 beatdown on the visiting Las Vegas Aces.

Six Connecticut players reached double figures with Jonquel Jones leading the way with 20 points and Alyssa Thomas who had a triple-double of 16 points, 15 rebounds, and 11 assists.

The first quarter set the tone for a dominant outing for the Sun. They scored 34 points in the first 10 minutes of play – the most points they scored in any quarter this postseason (via ESPN Stats & Info) as they took a 34-19 advantage. Inversely, it was also the most points the Aces have given up in these playoffs.

The Sun also made a significant defensive adjustment, putting 6-foot-4 DeWanna Bonner on Chelsea Gray. In addition, they also blitzed Gray every time she asked for a pick-and-roll which forced the Aces guard to give up the ball constantly. Gray finished with just 11 points on 4-for-7 shooting.

Alyssa Thomas recorded the first-ever triple-double in WNBA Finals history. She had a stat line of 16-15-11 to help her team get the victory. Her two steals and block were also testaments to her all-around game. She is also just the third player in league history to notch a triple-double in the postseason.

Thomas was so locked in she didn't even realize she made history.

"She's probably the toughest player I've ever coached"@CurtMillerWBB speaks about the toughness of @athomas_25 after she erupted for a 16 PTS, 15 REB and 11 AST triple-double ??#MoreThan pic.twitter.com/r5k4qngheO

The 2022 All-WNBA First and Second teams were recently announced with MVP A’Ja Wilson and runner-up Breanna Stewart headlining. This was also the first time in league history that the All-WNBA teams went positionless.