WNBA Playoffs: Mercury, Sky move on to the semifinals

Brittney Griner and Diana Taurasi starred for the Mercury as they dethroned the Storm, while Courtney Vandersloot steered the Sky past the Lynx. 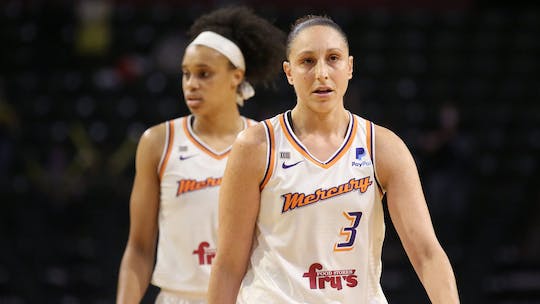 It was a day of upsets in the WNBA playoffs as the road teams successfully ousted the higher-seeded teams in the second round.

The Phoenix Mercury dethroned the defending champions Seattle Storm, escaping with an 85-80 overtime victory to advance to the semifinals.

Brittney Griner and Diana Taurasi took over in the extra period, giving the Mercury the lead that the Storm could no longer recover from.

Taurasi, who was a gametime decision due to an ankle injury, showed out even if she was not at a hundred percent. She finished with 14 points, including 10 in the fourth quarter and overtime.

Skylar Diggins-Smith had two opportunities to put the Mercury on top in the final minute of regulation, but she missed a couple of free throws and had her jump shot blocked. She made up for it with her playmaking and defense in OT.

Diggins-Smith was all over the floor, posting a total 20 points, seven rebounds, six assists, two steals, and two clutch blocks on Jewell Loyd.

Katie Lou Samuelson (18 points on 4-for-6 from 3) and Sue Bird (16 points, 5 assists) led the way for the Storm, who played without Breanna Stewart (foot injury). Loyd (15 points, 5 assists) struggled from the field, making only five of her 24 attempts including 0-for-7 from downtown.

The semi-finals matchups are LOCKED IN 🔥

In the second match, the Chicago Sky took down the third-seeded Minnesota Lynx behind Courtney Vandersloot’s brilliant performance.

The Sky dictated the pace, owned the paint, and proved unstoppable in transition as the Lynx defense failed to hold up.

Aerial Powers tried to do everything in her powers to keep the Lynx in the game, but the Sky refused to flinch even in front of the Minneapolis crowd.

When Brittney Griner is locked in, good things happen for the Mercury. The 6’7” center dominated the paint with 23 points, a playoff career-high 16 rebounds, four assists, and two blocks.

This marks the second time that a WNBA player had 23-16-4 in the playoffs, next to Tamika Catchings in 2009, and a first in a do-or-die game (via @HerHoopStats).

With her retirement decision looming, this was what Bird said when asked about Taurasi playing through injury: “She’s trying to be Willis Reed over here. Nobody on my team understood that reference. Maybe that’s a sign.”

What a moment between @S10Bird and Diana Taurasi #respect 💐 pic.twitter.com/0c8l3c5fXV

GOAT exchange – Bird and Taurasi hugged it out and exchanged jerseys after a tough battle. Will this be the last time that we see these two legends on the court together or will Bird give in to the “one more year” request of Storm (and all basketball) fans?