The WNBA semifinals are set after a pair of upsets that shook the playoffs. The Phoenix Mercury were the first team to make it into the Final Four after a heart-stopping overtime win over the defending champions Seattle Storm. The Chicago Sky then completed the semifinals cast after stunning the third-seeded Minnesota Lynx.

After two rounds of single-elimination games, the semifinals feature two best-of-five series, with Game 1 happening on Wednesday (PHT). The No. 6 Sky take on the No. 1 Connecticut Sun (8:00 AM), while the No. 5 Mercury face off with the No. 2 Las Vegas Aces (10:00 AM).

The Sky are coming in hot after taking care of their opponents in a pair of win-or-go-home games, including an upset of the third-seeded Lynx in the second round of the playoffs. Powered by Courtney Vandersloot and Kahleah Copper, the Sky picked apart the Lynx’s defense while sticking to their run-and-gun identity to book a ticket to the semifinals.

Now the Sky are gearing up for their biggest challenge yet – the top-seeded Sun, who are well-rested after receiving a double-bye that automatically qualified them to the Final Four. The Sun are bringing with them a franchise-record 14-game winning streak heading into the playoffs.

Jonquel Jones, who has been the league’s best player this season, is expected to take the Sun as far as she can, and she definitely won’t be content until they’re back in the WNBA Finals. The last time the franchise did in 2019, they lost the crown to the Washington Mystics. Do they finally have what it takes to make it all the way?

The Sky won two games against the Sun in the regular season, but it’s important to note that Jonquel Jones did not play in both games due to overseas commitments. Jones’ dominance on both ends of the court will pose a huge problem for the Sky.

The Sun’s overall team defense will also be a hurdle for the Sky. The Sun are No.1 in the league in terms of defensive rating, only allowing 91.7 points per 100 possessions. They are also the best in limiting opponents’ points in the paint (29.0 per game) and second-chance points (6.3). They also know how to stop fastbreak points, only allowing 6.8 per game. This would come in handy as inside scoring and fastbreak transitions are the bread and butter of the Sky.

The Sky have a lot of firepower, especially in the backcourt. They have one of the best point guards in Vandersloot and shooters in Allie Quigley. They also have Copper and off-the-bench spark Diamond DeShields who can carry the scoring load. It will be interesting to see how they will navigate the solid perimeter defense of Briann January and Jasmine Thomas, who both made this season’s All-Defensive team along with the Jones bigs (Jonquel and Brionna).

Candace Parker may not put up the numbers that she used to contribute at her peak, but she’s still a vital component of any playoff team, given her leadership skills, championship experience, playmaking, and defense. She’s the glue that keeps the Sky together. Against the league-best defense of the Sun, her aggressive scoring will be needed. Her energy on the floor will also have to rub off on her teammates. 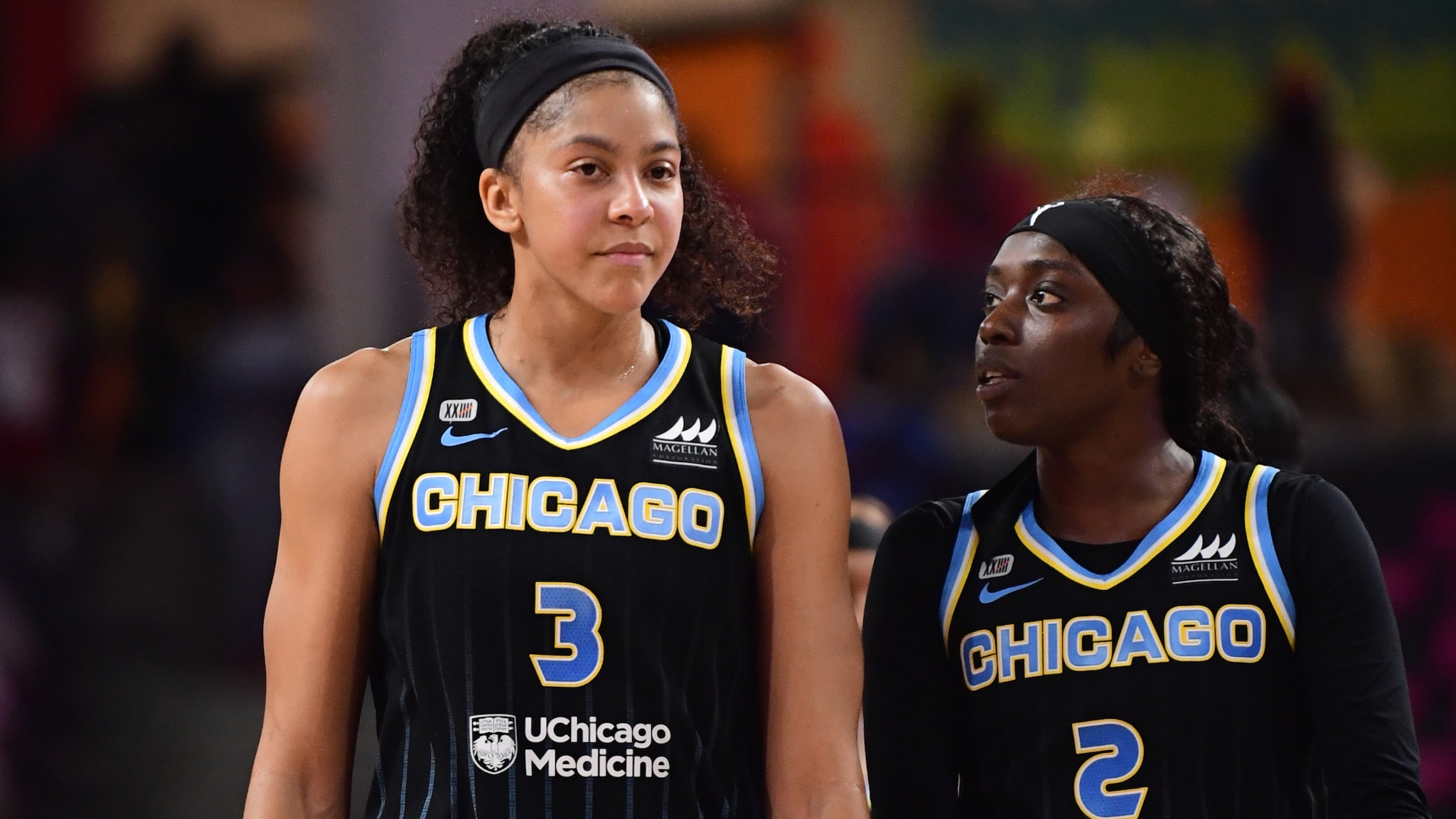 Alyssa Thomas recently returned to the Sun lineup after tearing her Achilles tendon nine months ago. In the two games that she played, she averaged 5.5 points, 5.0 rebounds, and 2.0 assists. The 6’2” forward has been a key piece for the Sun in the past seasons and she could be a difference-maker in these playoffs if she can get back to her top form. She’ll be an asset in terms of playmaking, rebounding, and defense. Even if she only sees limited action, she can still provide meaningful minutes for the Sun.

It’s largely the Sky’s offense versus the Sun’s defense in this series.

The Sky have conquered the Lynx’s top-tier defense in the previous round, but the Sun’s defense is on an even higher level. The Sky’s offensive attacks need to click each time, and the importance of Vandesloot’s playmaking cannot be over-emphasized as they try to break down the walls that the Sun will put up.

The Sun, on the other hand, need to be wary of the scoring outbursts that the Sky are capable of doing. They cannot let the Sky dictate the pace and take them out of their game. They also shouldn’t underestimate the Sky’s defensive efforts. The Sun’s guards need to connect on their shots to space the floor and help Jonquel Jones and DeWanna Bonner operate more effectively in the paint.

Diana Taurasi's status will be the talk of the town once this series gets underway. The decorated champion and All-Star returned to the Mercury lineup against the Storm after missing the previous five games with a left ankle injury. Despite being hobbled, she managed 14 points, four rebounds, and five assists in the win. Most impressive of all, she scored six points in overtime, proving that she can be just as deadly despite not being at a hundred percent.

Brittney Griner and Skylar Diggins-Smith might bring the firepower for Phoenix but Taurasi in the lineup makes them even more potent. She probably won't drop 30 points, but her effectiveness nowadays is tied with her leadership, passing, and timely shooting. Hopefully, she can continue to heal and be as close to tip-top shape so we can have a good series.

If the Aces want to make a return to the WNBA Finals, they'll have to put their guard up and not let Taurasi dictate the Mercury offense.

The matchup in the paint will be a treat to WNBA fans as it will feature some of the best frontcourt players in the game today. It's going to be Brianna Turner versus A'ja Wilson and Brittney Griner versus Liz Cambage.

Griner and Turner each had huge double-doubles against the Storm with the former putting up 23 points and 16 rebounds and the latter going 12 and 12. Turner earned a first team All-Defensive nod while Griner was named in the second team, leading the league in blocks with 1.9 per game.

The 6-foot-8 Cambage recently returned after battling COVID-19 and she's one of the few bigs who can single-handedly match up against the 6-foot-9 Griner. Wilson, meanwhile, is last year's MVP and the Aces' offense mostly runs through her. This season, she averaged 18.3 points on 44.4 percent shooting, 9.3 rebounds, 3.1 assists, and 1.3 blocks. It will be a nip-and-tuck affair between Wilson and Turner who are both very versatile. Kelsey Plum has been a game-changer for the Aces this season. After an Achilles tear that forced her to miss the 2020 season, she's back with a vengeance. She's posting career-highs in points (14.8), three-pointers made (1.7), and steals (1.0). Her 2.5 rebounds and 3.6 assists are close to personal-bests too. She's been a jolt of energy off the bench for the Aces, providing a ton of scoring and playmaking. She might not be a starter, but she often finishes games. The Aces will need every bit of her scoring prowess against the Mercury.

On the flip side, the Mercury will have to get bench production in this series. A game or two will be decided on who can be that spark outside the starting five. Sophie Cunningham provided the heroics against the New York Liberty. However, versus the Storm, the Mercury only had four bench points courtesy of Kia Vaughn.

During the regular season, Cunningham, Vaughn, Shey Peddy, and Megan Walker have all been critical for Phoenix's success. They'll need to provide a bit of a scoring punch to crack the Las Vegas defense.

Speaking of defense, no Aces player made it to the All-Defensive teams despite being number two in defensive rating, so they might have an axe to grind come semifinals time.

The Aces boasted a defensive rating of 96.0, second only to the Sun's 91.7 during the regular season. They limited opponents to 80.2 points (fifth-best) on 41.5 percent shooting (second-best). They also got the most defensive rebounds with 31.3. All these numbers will be crucial against the Mercury who put up 82.1 points in the regular season and 84.0 in two playoff games.

At the same time, the Mercury will have to be wary of going in an all-out shootout against the Aces. The Mercury were number two in offensive rating in the regular season with 104.3, but guess who was on top of the list? Yup, it was the Aces with 107.1. Las Vegas was also the best team in putting points on the board with 89.3 per game.

So what do the Mercury do? They have to go to their strengths in Griner and Diggins-Smith, while hoping that Taurasi will also bring her A-game.