The Chicago Sky and Phoenix Mercury took care of business at home, getting a 2-1 series lead against the Connecticut Sun and Las Vegas Aces, respectively. 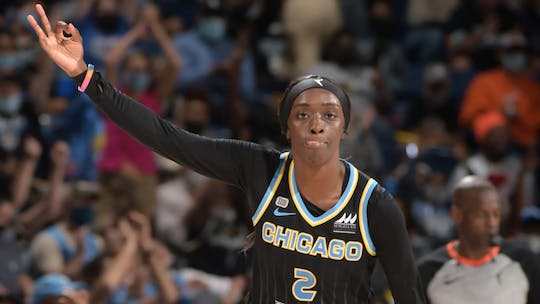 The Chicago Sky completed a late comeback to take an 86-83 win against the Connecticut Sun in Game 3 of the semifinals. The No. 6 ranked Sky are one game away from upsetting the top-seeded Sun and booking a ticket to the 2021 WNBA Finals.

It’s rare to see someone understand their role in the team as much as Courtney Vandersloot does. The veteran guard entered the final period with ZERO points despite being on the floor for 28 and a half minutes. However, her impact went beyond scoring as she finished with a total of 13 assists, which puts her average at 12.3 assists in the semis. On top of her phenomenal playmaking, Vandersloot added seven points and five rebounds.

The teams went back and forth in all three quarters, but the final minutes were a little different for both teams. The Sun pushed the lead up to seven at the beginning of the first quarter. But Kahleah Copper hit two crucial jumpers that got Chicago’s offense on the right track. Vandersloot took an offensive foul from Alyssa Thomas that totally shifted momentum and ended with a 15-2 run that put the Sky on top.

However, Thomas wouldn’t allow the Sun to give up just yet, creating her own version of a 4-0 run, making it a single possession ball game. The two teams continued to make shot after shot, but Thomas and Briann January missed two crucial layups that could have sealed the game for Connecticut. Candace Parker came up with a monster block on Thomas with 2.5 seconds on the clock, then a huge rebound after Thomas missed a putback attempt, which allowed them to take the win and a 2-1 lead in the series.

Copper led the game in scoring with 26 points on 9-of-14 shooting from the field including three triples. Allie Quigley also came up with an excellent game with 21 points. Azura Stevens and Parker both finished with double-doubles, posting 15-11 and 10-10 respectively.

DeWanna Bonner made it rain for the Sun with 22 points on 4-of-5 shooting from downtown. Jonquel Jones struggled again to find her footing, but managed to contribute a double-double with 10 points and 10 rebounds.

Brianna Turner became the Phoenix Mercury’s X-Factor as she exploded with 17 points in the opening quarters of their match against the Las Vegas Aces. She set a personal record for her first-half career-high. Turner helped orchestrate the Mercury blowout leading her team with 23 points and 17 rebounds.

Phoenix’s win against the Aces puts them one game away from advancing to the 2021 WNBA Finals.

Kahleah Copper and Candace Parker were spreading love to each other after Copper had an incredible performance against the Sun. Parker couldn’t help herself and started taking “pictures” of her teammate during the post-game on-court interview.

Phoenix is just a few days away from hosting an unprecedented WNBA and NBA double header in the Mercury’s home court. The event will be held on October 7, Thursday (PHT) at the Footprint Center, featuring a preseason game between the Suns and Lakers at 6:00 AM and Game 4 of the Sun and Sky at 10:00 AM.

“There were a lot of moving parts and a number of groups, including the NBA and WNBA, the Lakers and their local broadcast partner, and ESPN that had to work together to make this happen,” said Jason Rowley, President and CEO for Suns Legacy Partners, LLC. “In the end, all parties should be proud to be a part of this historic doubleheader. Personally, I’m looking forward to a Phoenix sweep!”