WNBA Spotlight: Appreciating Sue Bird's greatness on and off the court 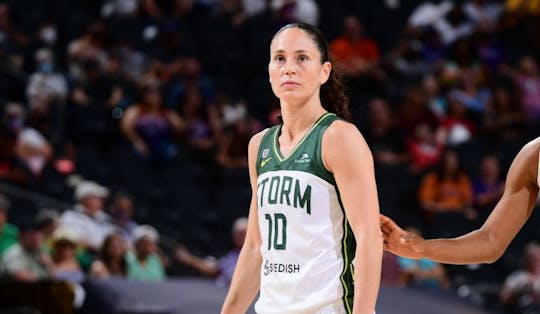 Winning and longevity are Sue Bird’s specialties. She has excelled and found a way to win on any level — college, WNBA, Olympics, Europe.

Essentially, Bird is one of the best pure point guards to grace the basketball court. She has developed an arsenal of moves but she’s also more than happy making the smart play and assisting her teammates for the bucket.

"I think the fact that I've been able to do it in different decades, with the same franchise, not many people can say that," Bird said in an ESPN feature. "To recreate it over time and stay at a high level over time is definitely something I'm proud of because it hasn't been easy."

She has also received many individual awards since getting drafted as the No. 1 overall pick in 2002. Bird has become the all-time leader in assists and starts, a 12x WNBA All-Star, and one of six players to win an NCAA Championship, a WNBA Championship, and an Olympic gold medal.

There’s no doubt that the WNBA has had some fantastic players at the one-position, but Bird is one of a kind because nobody has consistently impressed the world for as long as she has.

With almost 20 years in the WNBA, the discipline and leadership Bird shows have become the gold standard for anyone lucky enough to be her teammate. She leads by example and elevates everyone around her. Her career alone is something to look up to because of her ability to perform at such a high level.

She didn’t win her four championships in consecutive years of her prime, she won them in two different decades and can potentially do so in three different decades this year. Bird has constantly exuded greatness which makes me believe that she is a first-ballot Hall of Famer, without a doubt. I’d even consider her in the top three point guards in the WNBA of all time.

The championships won by the great @S10Bird

Sue Bird is one of the swaggiest people alive. She is a trailblazer in the WNBA’s fashion and sneaker scene because of her rare collectibles and fire tunnel fits. Not to mention, her relationship with Megan Rapinoe is #GOALS. They are the definition of a power couple with six international gold medals and too many championships to count between the two of them.

The two superstar athletes are more than just icons, they also consistently use their platform to shed light on social injustices within the Black and LGBTQ communities. In recent years, the two co-hosted the ESPYs and used it as an opportunity to talk about the complicity of white silence with Bird navigating her previous apprehension about speaking out.

“Do Black lives matter to you when they’re not throwing touchdowns, grabbing rebounds, serving aces?” Bird asked. “If that was uncomfortable for you to hear, good. I used to shy away from moments like this because it’s convenient to be quiet, to be thought of as safe and polite.”

Bird’s legacy in the world of basketball is already cemented as one of the best, but her activism and allyship show that she’s much more than rings and personal achievements. She embraces the challenges that come with being a female athlete, especially as a gay woman. Instead of shying away, she elevates her voice on the pressing issues that affect her teammates and her community.

As the WNBA Players Association Vice President, she was instrumental in the negotiations behind the historic Collective Bargaining Agreement. As an ageless icon in the WNBA, she’s at the forefront of pushing the league forward for the new generation.

When Sue Bird finally decides to retire, a day I am dreading, she is going to be remembered as one of the WNBA’s most influential players ever. A fashion guru with the league’s best sneaker collection. An unstoppable point guard whose jaw-dropping dimes transcend decades. And most importantly, a champion of the people.

The All-Star starters and two team captains will be revealed on Jan. 26 on TNT (7 ET).