Even without Tina Charles, the Mystics managed to bounce back from a blowout loss to the Dream behind Ariel Atkins' career-best 32 points. 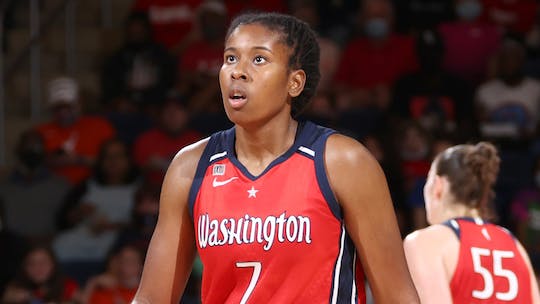 This weekly wrap covers the games from June 15 to 21 (PHT). Check out last week's edition here.

After their biggest loss this season, the Washington Mystics had four days to figure out how to avoid another 101-78 blowout against the Atlanta Dream. The Mystics responded by holding on to a 96-93 victory in their rematch last Wednesday.

At the start of the game, it felt like the Dream had it all figured out. They outscored the Mystics 21-13 in the opening minutes, taking the lead as soon as tipoff. Come halftime, things started to shift.

The Mystics went on a scoring binge led by Theresa Plaisance and Ariel Atkins who combined for 15 of the team’s 29 points in the third quarter. It was go time from there on, with the Mystics continuing to outscore the Dream and Atkins sealing the game with a clutch 3 and crucial free throws.

Atkins and Plaisance both had career-high performances with 32 and 25 points, respectively. Natasha Cloud was shy of a triple-double after she had 10 points, nine rebounds, and 11 assists.

The Mystics played without their star Tina Charles, who attended the premiere of her film Game Changer at the Tribeca Film Festival in New York City.

Odyssey Sims led the Dream in scoring with 22 points along with four rebounds and seven assists. Tianna Hawkins added 17 points, while Tiffany Hayes had 16.

Washington’s victory made Mike Thibault the winningest coach in WNBA history with 350 wins.

After losing to the Las Vegas Aces and Dallas Wings early in the season, the Seattle Storm barrelled their way to a 5-game winning streak. Noelle Quinn now has an impressive 7-1 record in her first month as the head coach of the Storm.

Things keep going in the right direction for the Storm. Sue Bird is now second in the all-time list of made threes in WNBA’s history, just behind Diana Taurasi.


While Bird’s made 2s are now at a career-low of 1.6 per game, her field goal shooting clip is through the roof at 52.3 percent. This career-best percentage is proof that while her game has changed over the years, her ability to recognize and adapt to her role has remained constant.

“If you think of years past, my role has had to be to look to score more, to be more aggressive. I think, still now, I try to be at times, but I don’t have to take bad shots.” Bird said. “We have so much offensive power, we move the ball so well. Nobody really ever has to take bad shots, so I think it just lends to more efficiency.”

And it’s true. If you have players like Breanna Stewart who’s averaging 21.1 points and Jewell Loyd with 18.9 points per game, then Bird’s low scoring isn’t necessarily a problem.

She’s explosive, dominating, and everything in between. Brittney Griner continues to wow the WNBA with her firepower. At 6’9”, BG is using her length and hops to average a double-double of 19.6 points and 10.1 rebounds. Not to mention, she’s also tallied two dunks in just the first month of play this season. She’s already recorded 20 dunks in her WNBA career, vastly overtaking the rest of the league’s combined three regular-season dunks in the past 25 years.

'Bout time for that updated BG dunk mix 🗣 @brittneygriner has thrown down twice in just the first month of play of 2021. She's recorded 20 dunks in her WNBA career.

The rest of the WNBA in the league’s 25-year history has combined for three regular season dunks. #CountIt pic.twitter.com/ip39i3l1YA


Meanwhile, Kelsey Plum was a perfect pick off the bench as she hit a career-high 32 points to give the Las Vegas Aces a win over the New York Liberty, 100-78, last Tuesday. Plum went on an incredible 11-of-16 shooting from the field and a perfect record from the line. She is playing the best season of her young career with averages of 12.9 points, 2.7 rebounds, and 3.1 assists.

And speaking of the Liberty, Rebecca Allen’s impact on the floor goes far beyond her ability to score. Allen struggled within the arc against the Los Angeles Sparks in Monday’s anniversary game. She only had five made shots – all from downtown – out of her 15 field goal attempts.

However, it was her defensive effort that made a huge impact on the Liberty’s win. Allen got back-to-back blocks late in the game that sealed the close match, 76-73. She finished the game with a season-high of 19 points, six rebounds, three assists, and three blocks.

It’s time for a new generation to step up.

24 years ago, the WNBA had its very first game between Liberty and the Sparks. Many of the league’s up-and-coming stars were too young to even walk at the time!

Today we celebrate the anniversary of the WNBA's first ever game 🎉

Look through this thread to see how old some of the current @nyliberty and @la_sparks players were when that first NY-LA matchup went down#CountIt pic.twitter.com/NPSEfup0uO


On June 20, 1997, Betnijah Laney was three years old. Te’a Cooper was two months and five days old. Michaela Onyenwere and Sabrina Ionescu? They weren't even born yet! In the league's 25th season, they are now commanding attention by playing excellent basketball for their respective teams.

It’s easy to forget how young these stars are with the way they perform on the court. After only a few seasons in the pros, these players have emerged into top-tier athletes who are able to compete with the vets.

This is only the beginning and it can only get better from here.