The Seattle Storm and Dallas Wings had iconic matches this week that both ended in game-winners. 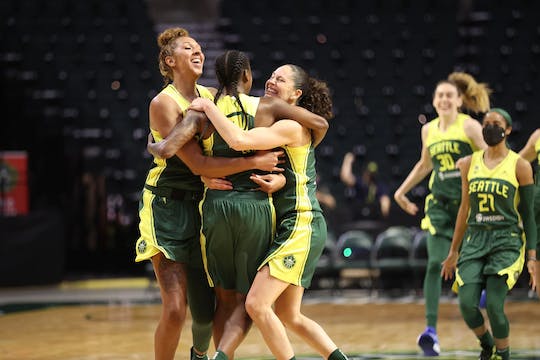 Storm celebrate as Loyd hits 3-pointer at the OT buzzer.

There’s a rivalry brewing in the West.

The defending champions Seattle Storm and the Dallas Wings met twice last week, and in pure WNBA spectacular fashion, both games ended with a game-winning 3.

In Saturday’s matchup, it was Storm’s Jewell Loyd who hit an insane buzzer-beating, catch-and-shoot 3 from the top of the arc.

Seattle seemed to have the game in the bag in the closing minutes, up nine with three minutes left in regulation. But Dallas made a run to send the game into overtime, thanks to Satou Sabally’s bucket with 7.9 seconds left.

In OT, Dallas had the upper hand in the final two minutes, but Loyd scored five straight points, including the game-winner with 0.8 seconds left to give Seattle the 105-102 win.

For Dallas, the scoring load was carried by Marina Mabrey (24 points) and Arike Ogunbowale (22 points) in the loss.

In their rematch, Arike won’t take another L. With Seattle up two, four seconds left, Arike drained a long-range bomb, leaving only 0.7 on the clock. No heroics for Seattle this time.

Endings like these are what fuel rivalries. Can’t wait to see what happens when these two teams play again.

Connecticut Sun has been on an awesome run as of late, led by the scoring rampage of Jonquel Jones (more on her later).

The Sun won two straight and only lost once in their last four games. This little run bumped them up to the top of the Eastern Conference with an 8-2 win-loss record.

The duo of Jones and DeWanna Bonner (16.6 points per game) make Connecticut a dominant force in the East.

Out West, Phoenix Mercury is finally getting the groove of things, winning three straight. Phoenix now has a winning record of 5-3, after a bad 2-3 start.

The big three of Skylar Diggins-Smith (19.4 ppg), Brittney Griner (17.0 ppg), and Kia Nurse (11.8 ppg) have settled into the right orbit, making Phoenix a more dangerous team than it already is. Imagine the damage they’ll do once they get Diana Taurasi back.

If you’ve watched Liz Cambage play basketball, then you’d know the feeling of both joy and pain rising up simultaneously.

If you haven’t, this play is the best visual:


Liz having a laugh while having fun posting up the league’s leading scorer Tina Charles of the Washington Mystics is a joy to watch. But can you imagine being on the receiving end of a Liz post-up move? Pain.

This season, Liz is putting up numbers that inflict pain to opponents: 15.4 points, 8.2 rebounds, and 2.2 blocks per game.

Jewell and Arike both delivered quality game-winning highlights the past week, but Kia Nurse’s version is top-level.

With her team down two points, Kia Nurse ran the length of the floor, evaded her defender with the Euro-step, then went up for a game-winning 3 from the logo. Bang.

A EURO STEP DEEP ONE FOR THE WIN AT THE BUZZER #WNBATWITTER... I mean WOW @KayNurse11 pic.twitter.com/jGpr0Oj7fp


Nurse has been hitting 40 percent of her 3s this season, which translates to: that was in no way just a lucky shot highlight.

Speaking of highlights, Brittney Griner has been racking them up.

Griner’s version though involves the slamming it home variety.


Aside from being a dunk machine, she’s been a force inside lately, averaging 17.0 points and 9.6 rebounds per game.

Will there be a new WNBA MVP this season?

If the Sun’s Jonquel Jones keeps this up, there could be. Jones is averaging close to 22 points per game in 10 games and is leading the league in rebounds with 10.4.

In a recent game against the New York Liberty, Jones dropped a season-high 31 points and grabbed 13 rebounds for a dominant 85-64 win.

It was Jones’ seventh double-double of the season—expect that stat to pile up in the coming weeks.
Read Next
Feature