Nneka Ogwumike returned to action after being sidelined by a knee injury for over two months. 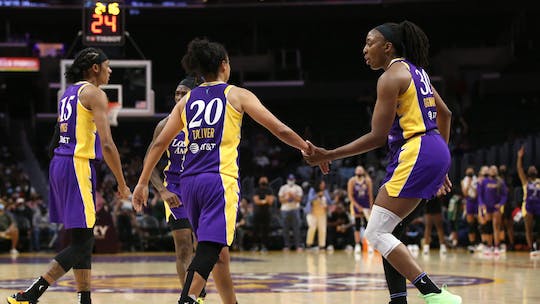 The Los Angeles Sparks closed out Friday’s 66-64 win against the Atlanta Dream in dramatic fashion.

The Sparks turned a slow 0-5 start into a 9-0 scoring frenzy at the end of the opening quarter. They took care of the lead almost the entire match until the Dream began catching fire in the fourth period.

Atlanta made a last ditch effort to salvage what was supposed to be an easy win for LA and put on an 11-2 run tying up the game at 64 apiece. With less than five seconds on the clock, Kristi Toliver missed a deep 3, but Nneka Ogwumike quickly cleaned it up to give the Sparks a 2-point lead with 0.1 seconds on the board.

LA successfully held on to a game that was almost lost in the final minutes.

Ogwumike was effective within the arc where she hit 7-of-11, finishing with 17 points, seven rebounds, four assists, and three steals. Toliver and Amanda Zahui B both had 10 points and combined for nine rebounds and six assists.

For the Dream, Courtney Williams led with 23 points, 11 of which were scored in the first half. She also added 11 rebounds and four assists. Aari McDonald had 15 points in 19 minutes with 50 percent shooting from the field and beyond the arc.

The Seattle Storm, who ended the week 3rd in the standings with an 18-3 record, will visit the White House on Tuesday (PHT).

The 2020 WNBA champions will be the first WNBA squad to be honored with a White House ceremony since the Minnesota Lynx in 2015. The Storm will be joined by franchise president and CEO Alisha Valavanis and WNBA commissioner Cathy Engelbert.

Crystal Langhorne, part of last year’s championship team and now serving as the Storm’s Director of Community Engagement, will be talking about the team’s Force4Change initiative and how they are using their platform to help bring social justice movements to the forefront.

A bunch of records were set last Wednesday (PHT), and this is a recap of how good that day was for the WNBA history books.

Brittney Griner had a dominant 25 points and seven rebounds in the Phoenix Mercury’s four-point win against the Indiana Fever (84-80). However, it was her defensive stops that were put on display in the tight matchup. Griner had four big blocks making her the third player to reach 700 blocks in WNBA history, next to Margo Dydek (877) and Lisa Leslie (822).

Protecting the paint 😤@brittneygriner is the third player in #WNBA history with 700 career blocks#CountIt pic.twitter.com/MqkOm9XpPY

Jonquel Jones called the game for the Connecticut Sun with 17 points and 13 rebounds in Wednesday’s game against the Minnesota Lynx. Her performance landed her at 2000 career points after just five seasons. They successfully snapped the Lynx’s 8-game winning streak, and brought them to a 2-game slide after another victory on Friday (PHT).

Kelsey Plum led the second half comeback of the Las Vegas Aces’ win over the Washington Mystics. She scored 21 of her 24 points in the third and fourth quarter, while effectively cutting Tina Charles’ chances of getting a ninth 30-point game. Alongside Plum, A’ja Wilson posted a double-double of 19 points and 14 rebounds. In only her fourth season in the pros, Wilson is now the fifth player in WNBA history to reach 2000 points in under 105 games.

The Connecticut Sun are on a roll and they have not shown any signs of slowing down. The team has an active 5-game winning streak and a spectacular 17-6 overall record. Plus, they have a 10-1 record at home which will play a key role later on in the playoffs. They are at the top of the league standings, tied with the Las Vegas Aces.