The Connecticut Sun are on top of the standings with a perfect 5-0 record. New York Liberty's Sabrina Ionescu became the youngest WNBA player to notch a triple-double. 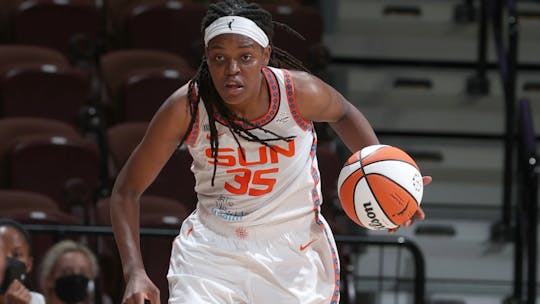 Jonquel Jones has been pivotal in the Sun's undefeated start.

The Seattle Storm took down the Dallas Wings Sunday (PHT) in a tight 100-97 victory in overtime.

Breanna Stewart had a stellar performance as she delivered 36 points, 11 rebounds, and three assists. Jewell Loyd also put on a show with 25 points, eight rebounds, and six assists.

On the other end, Marina Mabrey and Arike Ogunbowale teamed up to rally the Wings, as they combined for 54 points, 15 rebounds, and 11 assists. They orchestrated a huge fourth-quarter run that pushed the Wings ahead by four with 19 seconds left.

Loyd responded with a clutch shot from downtown, followed by an explosive drive from Jordin Canada to tie the score at the end of regulation. It was a back-and-forth affair in overtime, until foul shots from Stewart and Canada in the final 30 seconds allowed the Storm to take the lead and grab the win.

The Storm rose to 3-1 in the standings behind the Connecticut Sun (5-0) and New York Liberty (4-1), while the Wings absorbed their first loss in two games.

The Connecticut Sun are cruising with a perfect record in the first week of the season. DeWanna Bonner is top-scoring with 19.4 points per game, along with 6.6 rebounds and 3.6 assists. Jonquel Jones has also been pivotal with a double-double of 18.4 points and 10.8 rebounds.

The Sun preserved their undefeated run even as they played their third game in five days against the Las Vegas Aces Monday (PHT). They earned blowout victories over the Phoenix Mercury and Indiana Fever earlier in the week.

It’s even more impressive that the Sun are dominating without their star forward Alyssa Thomas, who’s out for the season due to a torn Achilles.

It doesn’t get any more big-time than this. So many records were broken, and it’s only the start of the season.

Despite their loss to the Storm, the Wings duo of Ogunbowale and Mabrey shined with their all-out performance. Ogunbowale posted 28 points, seven rebounds, and six assists, while Mabrey had 26 points, eight rebounds, and five assists.

This marked only the second time that a pair of teammates tallied 25+ points, 7+ rebounds, and 5+ assists in WNBA history, and only the first for the Wings’ franchise.

19 PTS and still one more quarter to go 💪

Any predictions on how much @Arike_O will finish with?

SHE IS SHOOTING LIGHTS OUT.. 🚨

THAT IS 6 MADE THREES FOR @mmabrey1


Meanwhile, Liberty star Sabrina Ionescu has been cementing her spot in the WNBA books this early in her career. Against the Minnesota Lynx, Ionescu finished with 26 points, 10 rebounds, and 12 assists.

This was not only the first triple-double in the Liberty’s franchise history; it also marked the fastest that any player achieved such a feat in the WNBA. Sheryl Swoopes, who recorded the first-ever league triple-double and previously the fastest, needed 59 games to earn the milestone. Ionescu did it in only her sixth career game.

The sophomore guard is averaging 18.4 points, 6.4 rebounds, and 8.8 assists. While she may not have the size advantage against the other players, her competitiveness and sheer desire to win have always kept her in the spotlight.

Don’t underestimate the firepower of the Las Vegas Aces. Yes, they may have started slow with a 2-2 record (No. 5 in the league), but you should know not to count them out.

The Aces split their first two matchups against their Finals nemesis, the Storm, and almost clawed back against the Sun in their most recent game.

Reigning MVP A’ja Wilson is just getting warmed up. Plus they also have three-time All Star Liz Cambage and a potential Most Improved Player in Jackie Young. All three are averaging 15+ points and 5+ rebounds so far in the young season.