Sue Bird announced that it would be her final season and the Aces continued their dominating ways in the past week in the WNBA. 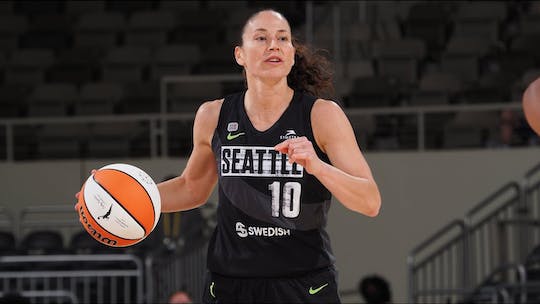 Player in the spotlight

The biggest news in the WNBA the past week came from Sue Bird, who recently announced that this season would be her last in the league.

Bird, who was drafted in 2002, is playing in her 19th season. She stayed with the Seattle Storm throughout her career where she won four championships. Bird is a 12-time WNBA All-Star and a five-time All-WNBA First Team member.

In a homecoming game against the New York Liberty, Bird finished with 11 points, three rebounds, and four assists. She had several friends and family in the audience who had supported her throughout her career.

The New York Liberty paid tribute to Bird, who grew up in  Syosset, Long Island, by wearing black shirts with the text “Thank you, Sue. Love, New York” printed on their chests. Of course, there was a tribute video, and Bird also received a gift from former Seattle Storm teammates Sami Whitcomb and Natasha Howard.

The New York Liberty honored Sue Bird with a 3+ minute tribute video and concluded the video with a gift presented to her by former Storm teammates Sami Whitcomb and Natasha Howard. @TheNextHoops pic.twitter.com/csUsiqdttA

WNBA fans were spoiled after witnessing three extremely exciting close games this week. In those matches, three players made headlines.

New York Liberty standout Sabrina Ionescu tallied a triple-double against the Chicago Sky. Though New York failed to notch a fourth straight win, Ionescu had an excellent performance, finishing with 27 points, 13 rebounds, and 12 assists. Ionescu also hit two crucial free throws to put New York up with under a minute remaining, but they could not hold onto the lead as the Sky took the win, 88-86.

Consistency should be Breanna Stewart’s new nickname as she led the Storm to a victory against the Minnesota Lynx, 81-79. The team played without Bird but Stewart carried the load with 29 points, eight rebounds, and three assists. She is having yet another MVP-like season, averaging near career-high numbers of 21.8 points, 7.6 rebounds, and 2.9 assists.

Meanwhile, NaLyssa Smith is getting into a groove as she continues her hot streak. She had a double-double of 26 points and 11 rebounds, making it her third straight game tallying over 10 rebounds. Because of Smith’s efforts, the Indiana Fever narrowly escaped with an 89-87 victory over the defending champions.

The Las Vegas Aces are at the top of the standings yet again with a record of 13-2. The Aces are currently protecting the league’s longest active winning streak at four. They currently have the best offensive rating at 108.5, net rating at 12.5, field goal percentage at 52.9, and pace at 83.69. They are also doing well on the other side of the floor with a defensive rating of 96, which is the third-best in the league.

A’ja Wilson continues to dominate as she blew up against the Los Angeles Sparks with a full stat sheet of 35 points, 11 rebounds, four blocks, and two steals in just 33 minutes. She is now averaging 18.5 points, 9.5 rebounds, and 2.5 blocks per game to lead the Aces.

Andrew Wiggins’ growth with the Warriors is undeniable

Game 5 was further proof that the right situation changed the course of Andrew Wiggins’ career.