Minnesota parted ways with coach Ryan Saunders after he was with the team for parts of the last three seasons. 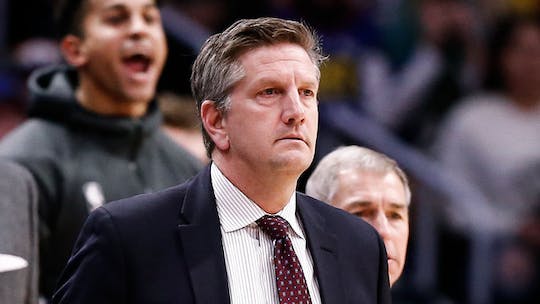 Three seasons removed from the franchise’s lone playoff appearance in 16 years, Minnesota is hitting the reset button once again. The Timberwolves announced late Sunday evening that coach Ryan Saunders had been relieved of his duties following the team’s 103-99 defeat to the New York Knicks.

“We would like to thank Ryan for his time and commitment to the Timberwolves organization and wish him the best in the future,” Timberwolves President of Basketball Operations Gersson Rosas said in a team statement. “These are difficult decisions to make, however this change is in the best interest of the organization’s short and long-term goals.”

On Monday, the Timberwolves announced the hiring of Toronto Raptors assistant coach Chris Finch as their next coach. Finch has 24 years of coaching experience, roughly half of that in Europe. The two-time NCAA Division III All-American at Franklin & Marshall College in Pennsylvania played for the Sheffield Sharks in the British Basketball League and later coached the same team from 1997-2003.

“I am excited to announce Chris Finch as our next head coach,” said Rosas. “Chris brings a wealth of basketball experience from his time in the NBA, G League and Internationally. He is one of the most creative basketball minds in the NBA, has success maximizing players, and I am excited to see him bring our team to the next level and beyond.”

Rosas and Finch worked together in Houston, where Finch was an assistant (2011-16) and Rosas was a basketball operations executive. Finch was a two-time NCAA Division III All-American at Franklin & Marshall College in Pennsylvania played for the Sheffield Sharks in the British Basketball League and later coached the same team from 1997-2003. Finch also coached Britain’s national team in the 2012 Olympics.

“I would like to thank Glen Taylor and Gersson Rosas for this incredible opportunity to be the head coach of the Minnesota Timberwolves,” said Finch. “I look forward to working hand and hand with Gersson to build and lead a team that Timberwolves fans will be proud of. We have excellent pieces in place and I can’t wait to get to work.”

Saunders, the 34-year-old son of the late Minnesota coach Flip Saunders, was with the Timberwolves for parts of three seasons, going 43-94. Minnesota has the league’s worst record this season at 7-24 and is already 7 1/2 games out of what would be the final play-in spot for the Western Conference postseason. Saunders officially took the reins in 2019 after an interim stint following the departure of Tom Thibodeau.

This has been a wildly disappointing season for the Timberwolves, who started 2-0 and haven’t had much to savor since. Karl-Anthony Towns, the team’s best player, dislocated his left wrist in the season’s second game and missed six games — then returned and missed 13 more after being diagnosed with COVID-19.

There was no sign that the Timberwolves had stopped playing for Saunders; they were down by 21 points in the third quarter at New York earlier Sunday, then took the lead in the final minutes before falling 103-99.

“Unfortunately we ran out of time,” Saunders said after that loss.

The 2020-21 campaign has been especially difficult for Towns. The 25-year-old, who lost his mother due to complications with COVID-19 last year, has played just 11 games this season due to a dislocated wrist and dealt with the virus himself. Towns, who made the All-Star team in 2018 and 2019 after being drafted No. 1 overall in 2015, is the longest-tenured player on the Timberwolves’ roster.

Russell, meanwhile, recently underwent ankle surgery and is expected to miss at least another three to five weeks.