ESPN analyst Doris Burke is a Hall of Fame broadcaster who has made a female's path to sports broadcasting a bit easier&nbsp;by tackling the challenges first. 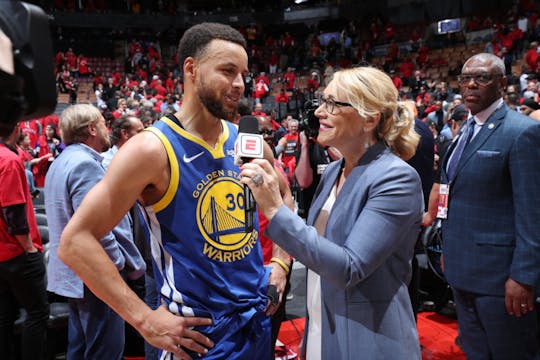 For this series, Julia Adams spoke to women from various positions around the league — from play-by-play broadcasters, to analysts, to producers — in order to capture how the NBA is supporting women to enter roles on a league-wide basis.

When ESPN analyst Doris Burke’s family relocated from New York to New Jersey at 7 years old, her mom put a basketball in her hand left by the prior owner to keep her distracted. As the youngest of eight siblings, Burke wasn’t being particularly helpful in the move. Her mom pointed to a park right next door and said, “Why don’t you go over there and play?” Burke’s love of basketball started that very day.

“It feels like I picked up the ball at seven years of age, and I haven’t put it down since to be perfectly honest with you,” Burke said. “I’ve played it, coached it, and now covered it since I was seven years old … if there is a ball being tipped up and I’m lucky enough to be there, that makes me really happy.”

Fast forward to today, Burke’s broadcasting accolades seem endless. She is a Hall of Fame broadcaster and one of the leading national NBA commentators. She became the first woman to serve as a game analyst for the NBA Finals in 2020 providing commentary on ESPN Radio. Prior to the 2017-18 NBA season, ESPN named Burke a national NBA game analyst, making her the first woman to serve full time in that capacity. She also is a recipient of the coveted Curt Gowdy Media Award by the Naismith Memorial Hall of Fame. Since the start of her career, Burke has made a female’s path to sports broadcasting a bit easier by tackling the challenges first.

Putting all her accolades aside, Burke said the most appropriate word to describe what she is most proud of is longevity. She first entered the business in 1990 after graduating from Providence College by calling their women’s basketball games on the radio.

“There was no one listening,” Burke laughed.

She also called the WNBA during their very first season in 1997 on radio, and remembers a moment when former NBA Commissioner, the late David Stern, decided to put a WNBA broadcast on the NBA’s main line messaging machine.

“It was the most listeners we ever had. If you were calling the NBA and waiting to talk to somebody, you might have heard our voice on the broadcast of the New York Liberty,” Burke said.

Burke loved watching Gayle Gardner on SportsCenter, and very early on in her career worked with Robin Roberts on ESPN for WNBA and women’s college basketball broadcasts along with Ann Meyers Drysdale and Nancy Lieberman. She was inspired by these women’s professionalism and passion for the game and hoped to emulate it in her own career. Roberts in particular was inspirational for Burke in her journey.

“Working alongside Robin Roberts … the one thing I would tell you is the most powerful means to change or impact somebody is by your actions,” Burke said. “She was the epitome of professionalism and competency and garnered the respect of the people around her because of the work habits she had. Watching Robin early on let me know that the basis for everything is the work you put into something.”

“Burke is the best example for anyone — male or female,” Hunter said. “I love the way she describes the game. She adds so much to every broadcast, and when I was playing in the WNBA I was always really inspired by her work.”

However, Burke is not comfortable being referred to as an “industry pioneer.”

“There are women, regardless of which sport, who have broken barriers [before me],” Burke said. “I happened to enter the business at a time where the perception of women was still changing. I know we are still in the process of that evolution — and we still have far to go. I do believe the coaches and the players have been my soft landing spot … there were those who paved the path and walked the path long before I did.”

Burke also said she still experiences paranoia or “imposter syndrome” every time she calls an NBA game — which comes with being female in a male-dominated industry.

“I am mindful of the fact that I have not played or coached in the NBA,” Burke said. “It doesn’t mean that I can’t do a very competent job. I think I try to do that every single night, and I’m never afraid to ask questions.”

But throughout her many years in the league, Burke believes wholeheartedly that the NBA is at the forefront in including females in roles across the sport. She remembers a moment with Commissioner Adam Silver in particular:

“During one of the Golden State and Cleveland Finals, [Silver] was giving his State Of The Union address prior to The Finals kicking off that year,” Burke said. “That was the year he said he would like to see a woman head coach in the NBA sooner rather than later. It was further evidence that this league continues to look for opportunities to represent voices from across society, and I am very proud to be associated with the league, because of its commitment to women and making sure they are included.”

“If you enhance a viewer’s experience, it doesn’t matter what your gender is,” Burke said. “As long as you are competent and put in the work … you’re going to be accepted.”
She is hopeful for the future of females taking on roles in the league — especially as more females come onto the scene in coaching, refereeing and broadcasting roles.

“I think we’re now starting to see one domino hit the next domino, and those dominoes are falling hopefully as quickly as we would all like them to fall,” Burke said. “It doesn’t matter if we’re putting Lisa and Kate in the play-by-play seat or me in the analyst chair … what matters is that we get women in those positions. I had a learning curve when I first started in the NBA … and a person cannot become an expert in the field unless they are given an opportunity … the change happening is significant, and I feel it.”