Yearbook awards for the 2021 WNBA season 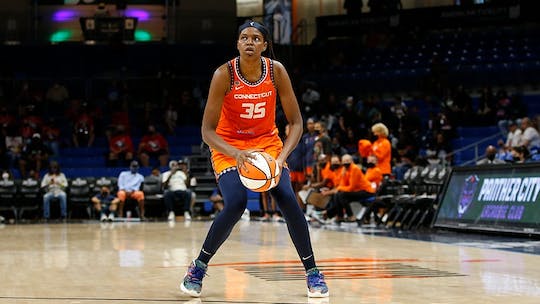 Jonquel Jones is the biggest of big-time ballers this season.

The 2021 WNBA regular season is coming to a close, and it's time to recognize those who have earned our praise. But we're not talking about the MVP, Coach of the Year, or Most Improved Player awards. We're going to dish out some superlatives instead.

NBA.com Philippines is taking the league back to high school with our yearbook awards for this season.

There have been many stellar individual performances from the W this season, but no other player has put up more impressive numbers while leading her team atop the standings. Jonquel Jones is an MVP frontrunner for a reason, and the Connecticut Sun's 24-6 record is a testament to her on-court brilliance.

Through 25 games, Jones is averaging career-highs in points (19.6) and assists (2.8). She's leading the league with 11.2 rebounds per game, while maintaining solid defensive presence, posting 1.4 steals and 1.2 blocks. This woman brings it every single game.

She already has two All-WNBA Second Team honors, three All-Star selections, a  Most Improved Player award (2017), and a Sixth Woman of the Year award (2018). Is the Most Valuable Player trophy right around the corner?

In June 2020, Kelsey Plum tore her Achilles tendon and missed the entire 2020 WNBA season. "I’ll be back, better than ever. Just wait on it," she tweeted back then.

A year later, she stood by her words and is now playing her best basketball. This past July, on the anniversary of the day she was able to walk again after surgery, she struck gold for Team USA in 3x3 basketball.

After posting modest averages of 8.9 points, 3.5 assists, and 2.4 rebounds in her first three years in the league, she's back on the court better than ever. She upped her scoring to a personal-best 14.3 points through 24 games for the Las Vegas Aces, while putting up 3.8 assists, 2.4 rebounds, and shooting 38.2 from deep. She's been a flamethrower off the bench for the Aces and is a serious candidate for Sixth Woman of the Year.

Layshia Clarendon entered this season as the WNBA's first openly transgender and non-binary player. Last January, Clarendon got a top surgery and posted a powerful caption on Instagram, expressing his freedom and joy.

"I want Trans people to know and see that we’ve always existed & no one can erase us!" said Clarendon, who uses all pronouns (she/her/they/them/he/him).

Clarendon is a proud member of the LGBTQIA+ community and an activist. He is part of the WNBPA and the league's Social Justice Council, all while being a floor general for the Minnesota Lynx.  His story and outspokenness has been a learning experience for the fans, the media, and the rest of the world.

Whether it's knowing the powerful usage of pronouns or understanding the struggles that trans people face, their openness and honesty have allowed fans to learn more. As people continue to understand Clarendon’s story, they have become a source of inspiration for being true to oneself.

Quote of the Year: Maya Moore

Maya Moore filled the headlines in 2019 when she announced that she’s taking a break from basketball to focus on fighting for criminal justice reform. Over the past couple of years, she worked tirelessly on overturning the wrongful conviction of her now husband, Jonathan Irons, who was imprisoned for over two decades after receiving a 50-year sentence in 1998.

Moore wants the headlines to highlight her incredibly important advocacy..

“The headline has been centered around the courage it took for me to step away from the game of basketball,” Moore said as she accepted her Arthur Ashe Courage Award at the 2021 ESPYS last July. “I’d say my courage has not been in me not playing, but in the emotional, mental, and spiritual outpouring into love and fighting against injustice.”

"Power is not meant to be gripped with a clenched fist or to be hoarded,” she also said. “But power is meant to be handled generously so we can thoughtfully empower one another to thrive in our communities for love's sake, championing our humanity before our ambitions."

Red, Yellow, Blue, Green – you’ve probably seen a variation of these colors all your life on jerseys from different sports. Then there’s the New York Liberty that said nope, we aren’t going in that direction.

NY’s Rebel Edition jersey features a full mint green base with warm metallic trimmings all around. The color choice resembles the oxidized copper material used for the iconic Statue of Liberty. The team also placed the word “EQUALITY” across the chest, with the Liberty’s torch to complete the whole look.

The one thing these ladies give their all to, other than basketball, are their fits. But no one rises to the occasion like Liz Cambage and her collection of iconic selections. When she’s not dominating the Las Vegas Aces’ frontcourt, she’s getting all glammed up for literally anything.

In the 2021 WNBA All-Star, Cambage slayed with a staple combination of a white cropped top, black mini skirt, and chunky black boots.

Cambage is also an ambassador for Savage x Fenty, a clothing line by Rihanna.

When the U.S. Women’s National Basketball Team calls game, you better bet they mean every bit of it. In the recently concluded Tokyo Olympics, Team USA brought home their seventh straight gold medal and extended their Olympic winning streak to a whopping 54 games.

The team was led by Dawn Staley, a former player and assistant coach for Team USA. She became the first Black woman to be a U.S. Women’s Basketball head coach.

Most social media team accounts are funny, conversational, engaging, and the good ones have a little attitude in them. A good Twitter team handle not only navigates the use of the latest memes and jokes, but knows how to push their team to the forefront of national conversation.

The Connecticut Sun's Twitter, one of the best social media accounts to follow in the W, checks all the boxes.

Some of their best work include their posts about Brionna Jones as a "Cover Girl" to campaign for her as the league's Most Improved Player. They posted magazine-type graphics and it went hand-in-hand with the team's pregame fit.

Another banger was a recent nod to the viral monologue of Steve from Blue's Clues and even Jonquel Jones was loving it.

The WNBA continues to celebrate its 25th season by launching “The W25”, a collection of 25 of the best and most influential players since the league’s beginning.

“Throughout this season, the WNBA and our fans are celebrating the impact the WNBA has made on sports and society over a quarter of a century,” said WNBA Commissioner Cathy Engelbert. “I can think of no better way to honor those responsible for that impact than by unveiling the members of this prestigious group, The W25. These athletes have played the game at the highest level on the court – they are scorers and rebounders, assist makers and defensive stoppers, leaders and mentors. In the community, they have powerful voices, individually and collectively, speaking out on important issues in our society. Together, they have transformed the way the game is played, changed the way athletes are viewed, become incredible role models, and inspired generations of young, diverse athletes.”

Fans are given the opportunity to vote for their favorite players until 11:59 AM on Monday, September 20 (PHT). The winner of the “Vote for the GOAT” program will be unveiled during the 2021 WNBA Finals.