Trae Young took over early in Game 1 to steal the show from Triple H, Joel Embiid, and the Sixers. 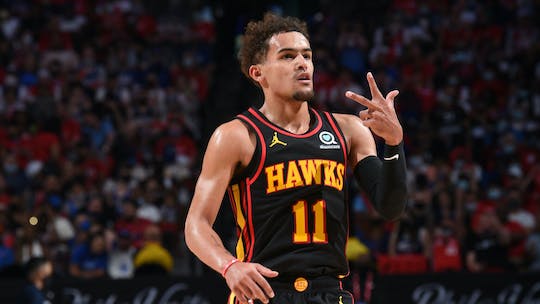 Growing up in the ‘90s, wrestling always came on late. Way past midnight, that’s when the backbreaking, spinebusting, electrifying action starts.

Game 1 of the Philadelphia 76ers and the Atlanta Hawks brought back a bit of those glorious, Monday night vibes.

It certainly helped that the game started at 1 AM. It was a big bonus that to ring the bell, Triple H himself—complete with sledgehammer and all—made an appearance with the newest DX member, Joel Embiid. Fun times.

As soon as the game clock started running though, the fun ended for the Sixers. The biggest heel of these playoffs, Trae Young, also made an appearance and seemed to have wrestling in his mind, too. Call him The Heartbreak Kid.

Young hit Philly with the sweet chin music early, resulting in the Sixers’ worst playoff first quarter in franchise history. By halftime, the Sixers were down 20, Young had 25 points and was one stepback 3 away from doing crotch chops to the crowd.

The Sixers didn’t know what hit them, which has been sort of the trademark that these Hawks leave on their opponents. Against the New York Knicks in the first round, that’s exactly what they did. Confuse the defense with a flurry of extra passes, bombard the nets with consecutive splashes, then boom.

Next thing you know, Trae Young is doing his heel thing of either bowing to the crowd or commanding them to be quiet.

The Sixers, though, didn’t give up without a fight. They made one final push in the closing minutes and got within three with about a minute left in the game. That’s the closest the Sixers would ever get.

Embiid, hurt and all, dropped 11 points in a gutsy effort in the fourth quarter. He finished with a game-high 39 points, but it still wasn’t enough to beat the pesky Hawks.

At this point, the Hawks are more DX than the Sixers could ever be. If that wrestling faction was all about going off script, creating havoc, and messing up the norm, then it fits perfectly to the Hawks’ current MO.

How do you stop a team whose main objective is to ruin your playoff bracket? How do you defend their superstar whose biggest goal is to eat defenses? Can you even try to slow down a rising star like Trae Young?

In Game 1, the Sixers had no answers. There was a moment in the dying seconds, Hawks up five, when Trae flexed once again how he couldn't be stopped. With two Sixers chasing to foul him, Trae evaded and outran both to get from the backcourt to the 3-point line, where he threw a lob to John Collins for a dagger dunk over Embiid—plus a foul. It was the basketball equivalent of a flying elbow drop from the top rope.

TRAE TO COLLINS TO CAP THE @ATLHawks W??


Kawhi Leonard, Devin Booker, and Nikola Jokic are doing their thing out West, but Trae Young has the potential to be this year’s icon, show-stopper, and main event.

He’s been putting up the numbers and getting the wins. He’s added another group of fans to his list of people to annoy.

It’s early in the series and the Sixers still have time to figure things out. But they better hurry before Trae’s heel storyline runs its course and he makes a face turn. Historically, we know that those make the best champions.