Zeroing in on title contenders and sleepers

As we head into the last stretch of the regular season, let's examine which teams are likely to make a deep playoff run and contend for the championship. The Lakers and the Heat were last season's finalists. Are they still title favorites?

“Give it to me straight. The least you could do is level with me. What are my chances?” Jim Carrey's Lloyd asks Lauren Holly's Mary in the 1994 classic Dumb and Dumber. Throughout the film, Lloyd goes through several misadventures just to reunite with Mary, along the way showing his titular dumbness.

“You mean not good as in one out of a hundred?” Lloyd asks.

“I'd say more like one out of a million,” says Mary.

“So you’re telling me there's a chance?” a completely oblivious Lloyd exclaims.

The mix of utter joy and ignorance in that scene is the same feeling for a lot of NBA fans looking at the state of their current teams and dreaming of a championship parade around June. What Kevin Garnett didn't tell you when he yelled, “Anything is possible!” is that he was, in fact, speaking metaphorically.

In a league that determines its champion through several rounds of seven-game series, the best team usually comes out on top with not a lot of upsets, barring injury luck. For every 2019 Toronto Raptors or 2004 Detroit Pistons, there are loads of favorites that ultimately come out on top by June like 2000-2002 Los Angeles Lakers or the recent Golden State Warriors championship teams.

Still, it's fun to imagine scenarios where a team comes out of the bottom of the playoff standings and wins the title. The following are this season's title contenders, grouped by teams to keep on snooze and first-alarm threats.

These teams need a lot of breaks to get through the first few rounds, let alone win a championship.

The most pressing team in this category are the Golden State Warriors. Without one of the Splash Bros and after integrating several new pieces, the Warriors are somehow still in the playoffs… sort of. By the sheer will of Steph Curry, the Warriors hold a 31-31 record, just good enough for 10th in the West and a spot in the newly implemented play-in tournament.

Curry has kept the Warriors alive in games they have no business winning and he could easily shoot the Warriors out of the play-in tournament and into the playoffs. But given their inconsistency outside of Steph, the Warriors may not end up going further. It's still going to be fun to see if Curry can go Allen Iverson and carry the Warriors’ offense on his own for several playoff series. 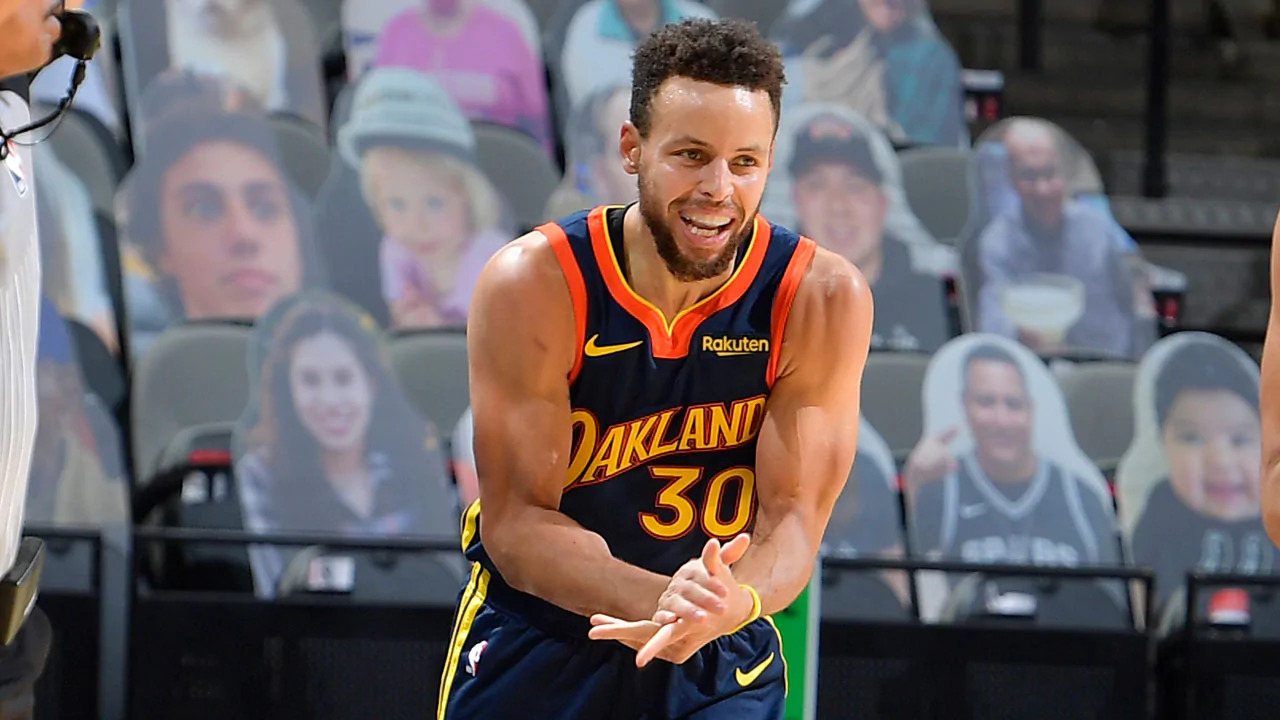 The same goes for other teams that rely on virtuoso performances like the Dallas Mavericks. Dallas this season has featured an inconsistent cast around their superstar Luka Doncic, who leads them in scoring, assists, and clutch plays. The Mavericks sit at sixth, with one game separating them from the play-in tournament. Doncic's individual brilliance has been enough to keep them afloat on a game-to-game basis in a challenging pandemic season, but Dallas is going to need more to crack the top teams in the West.

Speaking of more, the Portland Trail Blazers, on paper, have a lot outside of Damian Lillard. Before Dame Time strikes some time around the fourth quarter, CJ McCollum, newly healthy Jusuf Nurkic, and fresh addition Norman Powell keep the Blazers in games. Portland has managed to maintain a top six offense in terms of offensive rating through a more balanced approach. What the Blazers still lack, like their past playoff teams, is solid defense. The Blazers are porous on that end, ranking 29th in defensive rating.

Outside of Robert Covington, the Blazers lack impact players that can also defend the best facilitators in the West. The Blazers will still likely be tagged as a tough first round opponent for any of the top seeds, but they’ll need to prove they can get enough stops in the playoffs. 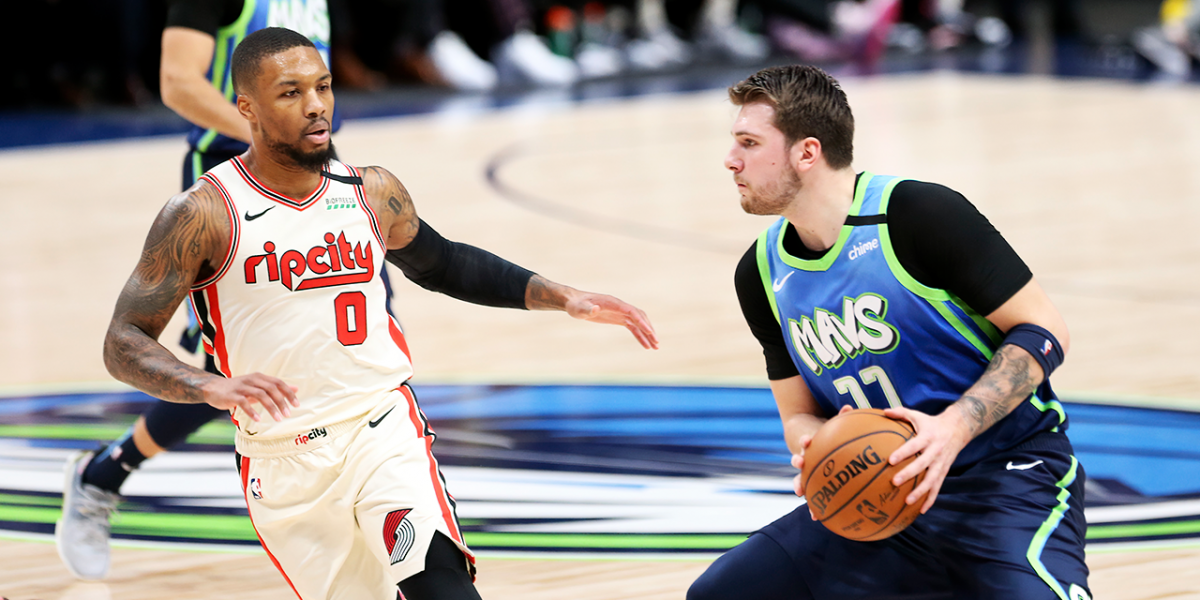 Out East, there are a lot of dark horse contenders if we lower our standards enough. One squad that has truly been disappointing but could make a giant 180-degree turn by the playoffs are the Boston Celtics. A lot has been said about Boston’s struggles with injuries, Danny Ainge's team building, and Brad Steven’s lack of adjustments. But watching the Celtics this season shows just how inconsistent the effort has been from up and down their roster. After Jayson Tatum’s hot streak, the Celtics have returned to their disappointing form, dropping to sixth in the East with three straight losses.

Still, having the combination of Tatum and Jaylen Brown with a healthy backcourt in Kemba Walker and Marcus Smart is still a great lineup in the East. This same squad made the East Finals last season and they could very well hit their stride again once the playoffs begin and the grueling regular season schedule is behind them. For now, the Celtics look far from the type of team that makes deep playoff runs.

One team that’s all about effort are the New York Knicks. Thanks to Julius Randle’s career year and Tom Thibodeau's toughness, toughness, toughness defensive system, the Knicks are quietly back in the playoff picture for the first time since 2013. Their grind-it-out defense has allowed them to stay in games against much more talented teams, but their lack of consistent offensive options outside of Randle has also hurt them, especially in close contests. They have a 15-15 record in games that come down to the clutch. The playoffs are perfect for their system that shuts down high-paced teams. Their offense, on the other hand, will need plenty of miracles to survive the pressure of close fourth quarters.

An important note about contenders: records only matter sometimes. Being a contender in the NBA, teams not only need to have a great record, they also have to be good playoff teams in theory or by history.

For example, the Los Angeles Lakers this year are only fifth in the West and may not rise in the standings further, even when they have a complete and healthy lineup. Despite that, the Lakers are still one of the favorites this season because the LeBron James and Anthony Davis duo coupled with their elite defense was so great in last year’s playoffs when they won the title. They still have James and Davis with a retooled supporting cast. They’re still going to be the big dogs come playoff time. 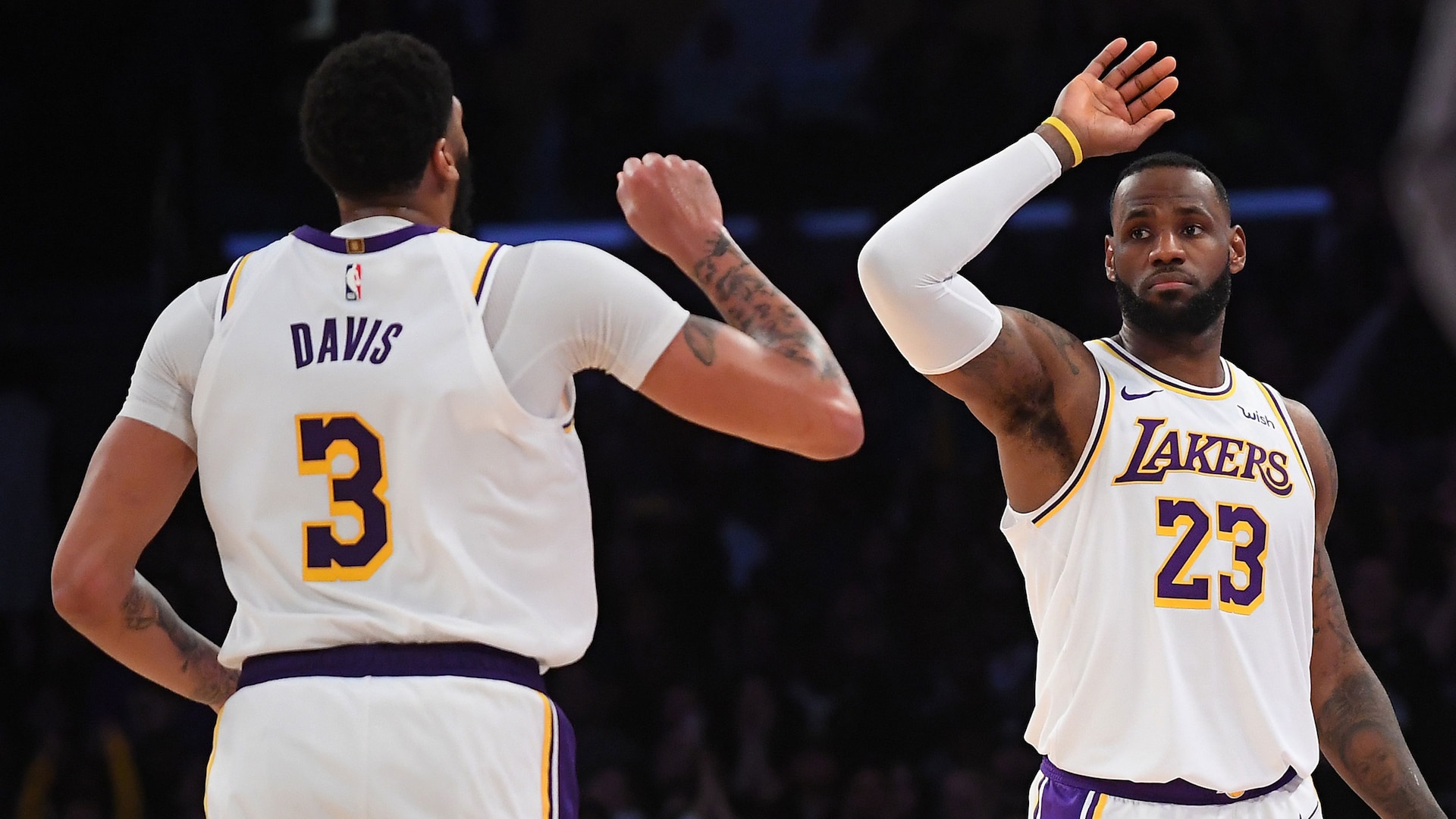 Same for the Brooklyn Nets out East, who have been experimenting for most of the season with an incomplete lineup but they still own the top seed. When they get Kyrie Irving, Kevin Durant, and James Harden back for the playoffs, they figure to be a historically great offensive team.

After those two, along with the Los Angeles Clippers and the Philadelphia 76ers, the field is mostly made up of flawed contenders.

The Utah Jazz have been the best team in the league, with a consistently awesome offense and defense. The main question for the Jazz is if they can carry that success over to the playoffs. Just like Christmas, NBA teams have made it a yearly tradition to expose the Jazz's weakness, specifically Rudy Gobert. When teams go small on them and pull Gobert out of the paint, the Jazz defense hasn’t shown a solid Plan B. Worse is the situation on offense when teams scheme to lessen the effectiveness of Gobert's screens and cuts.

This season, the Jazz have been much more brash and egalitarian on offense, with their movement-heavy offense hunting a ton of 3s. Their blueprint for success is becoming something close to the 2014 San Antonio Spurs that didn't have an overpowering superstar, but played peak team ball to dethrone the Miami Heat. That's a tall order for a team that hasn’t gotten further than the second round of the playoffs. 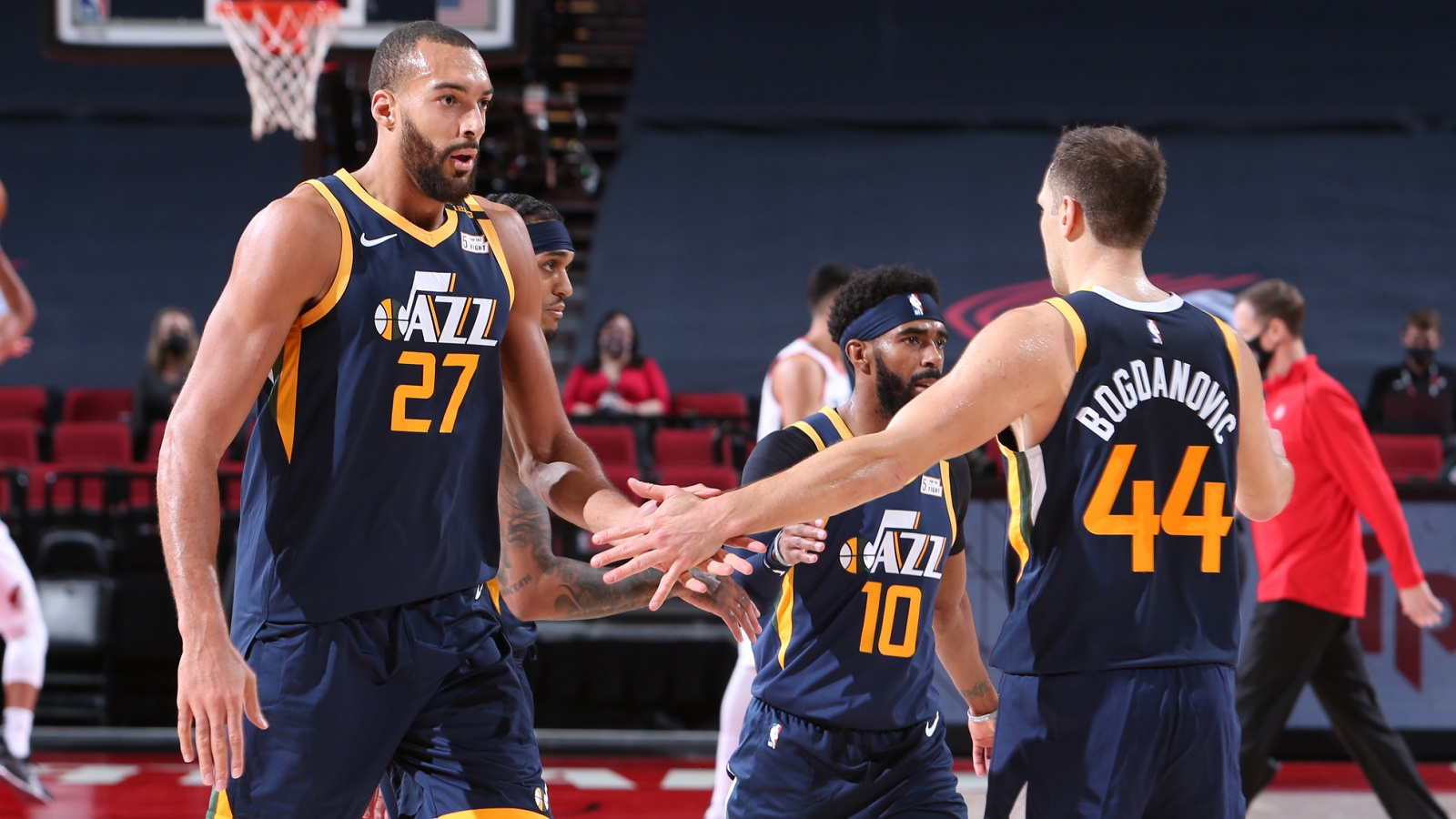 The Phoenix Suns, the second best team in the league, face similar questions. The addition of Chris Paul and the improvement of their young core have the Suns in prime playoff position. They’ve played balanced basketball all season while continuously outclassing fellow playoff teams.

However, the Suns, outside of Paul and Jae Crowder, have little to no playoff experience. Experts will continue to take a wait-and-see approach with the Suns until they prove themselves in the postseason, especially with their young duo of Devin Booker and Deandre Ayton. The playoffs are all about matchups and the Suns do present plenty of quandaries for their opponents to solve. But they also need to show that they can limit the superstars in the conference like the Lakers’ and Clippers’ duos.

In the East, the Milwaukee Bucks are low-key the most interesting team to watch in the playoffs. Two-time MVP Giannis Antetokounmpo is playing better this year, but has received minimal MVP buzz because of the stain of the Bucks' last two playoff exits. This year, there seems to be less pressure on the Bucks, since Antetokounmpo already signed his max extension this past offseason. They are also a better team, adding starters like Jrue Holiday and P.J. Tucker to complement their core of Giannis and Khris Middleton.

The Bucks' stubbornness hurt them in the playoffs. From Giannis’ strict minutes allocation to their punk defense of allowing 3s to limit drives, Milwaukee stuck to what made them a great regular season team and got burned. They also struggled to close games. Giannis might be a dominant overall player, but his lack of a jumper and subpar free throw shooting have limited his potential as a closer in the playoffs when games often come down to who can score the most in isolations. Milwaukee should be better this playoffs since they’ve already shown a willingness to adjust their system, switching more on lineups that don't feature a traditional center. Holiday and Tucker not only unclog Milwaukee's offense, they also raise their defensive ceiling with their ability to guard multiple positions. This Bucks team also has pretty good matchup answers for the Nets' Big 3 and the Sixers' Joel Embiid, so don't be surprised if they finally get over the hump this year when the spotlight hasn't been on them that much. 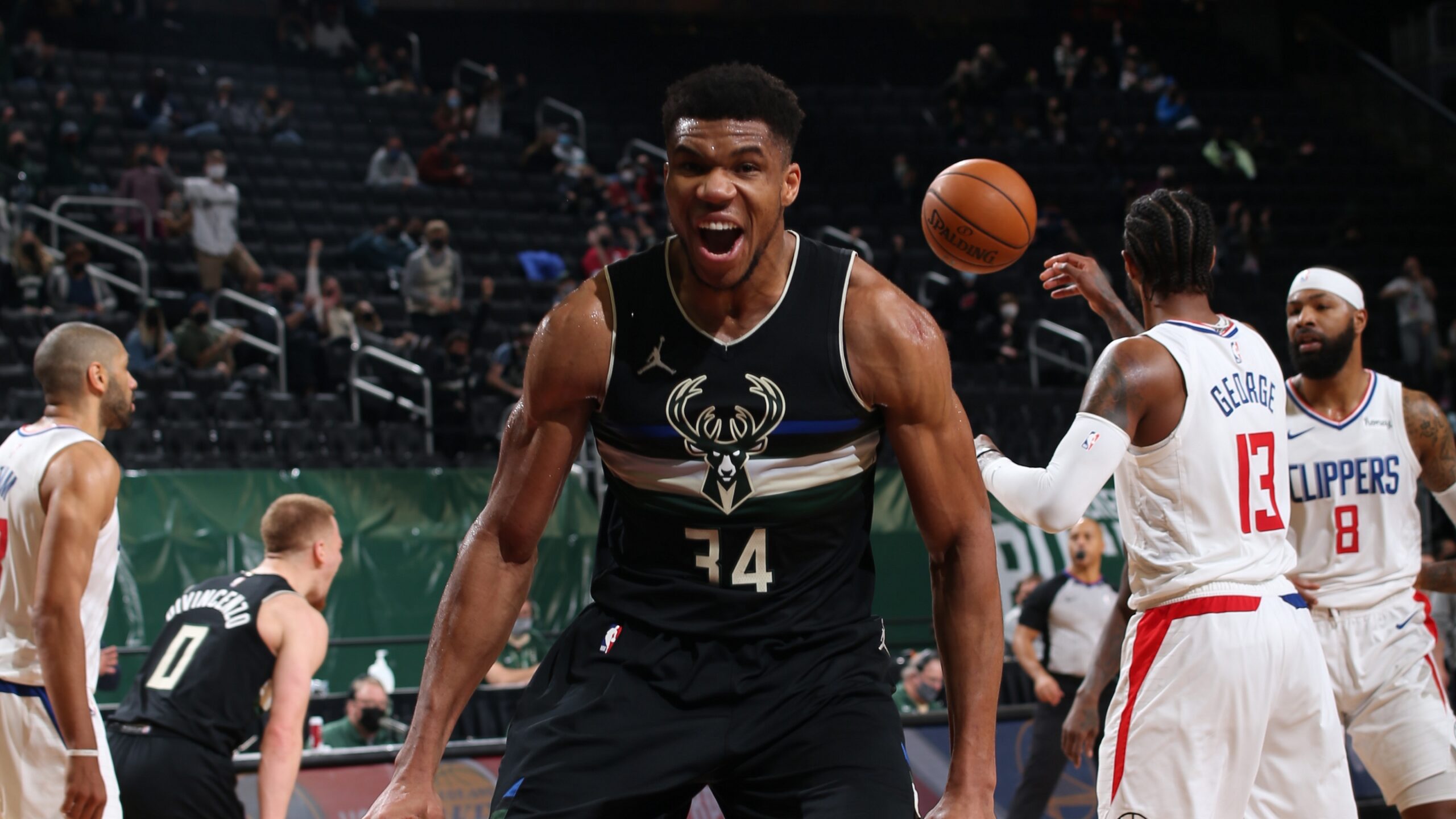 The true sleeper contender this year could be the Miami Heat. Just like the Lakers, Miami has felt the brunt of the compressed regular season schedule and shortened offseason. They've only been truly healthy for weeks at a time, before a key player needs to miss time due to injury. They've been off their rhythm and inconsistent all season, evident in the decrease in the mention of Heat Culture throughout the season compared to last year.

But this is still pretty much the same team that ran circles around the East last season. Jimmy Butler and Bam Adebayo have been terrific when available. The Heat's deadly shooters in Tyler Herro and Duncan Robinson have been up-and-down, but their ups have still been encouraging. The Heat also added new tools in Victor Oladipo, Precious Achiuwa, and a resurgent Kendrick Nunn.

It's just that the Heat currently sit at seventh in the East, right in the frantic mix in the middle with Boston, New York, Charlotte Hornets and Atlanta Hawks. It's going to be much tougher if the Heat need to participate in the play-in, but a healthy Heat team could be the most dangerous lower seed in recent playoff history.

The defending Western Conference champions have reportedly locked up a key contributor.