The Pelicans' star big man is still healing up from the right foot injury he sustained in the offseason. 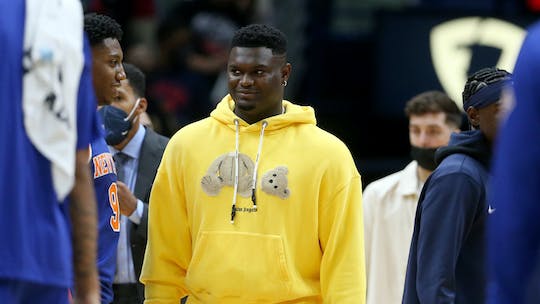 The New Orleans Pelicans have been without All-Star big man Zion Williamson all season and that doesn’t seem likely to change soon. As he heals up from the broken right foot he suffered in the offseason, there is positive news on his health, though.

Coach Willie Green told reporters Monday that Williamson had scans done on his foot and he is able to do some cutting and limited on-court work. However, Williamson is expected to be out at least another 2-3 weeks, at which point the Pelicans hope he will be a full participant in practice.

“He is progressing to do on the court work,” Green said. “He’s still not 5-on-5 competitively yet. He’s cutting. He’s doing explosive work. He’s getting closer and closer.”

Williamson had surgery in the offseason to correct a broken right foot he suffered while playing basketball in the offseason. The team announced at media day that Williamson, who averaged 27 points, 7.2 rebounds and 3.7 assists per game in 2020-21, was not expected to play in any of the team’s preseason games.

The Pelicans have struggled to begin 2021-22, and at 1-6 are tied with the Indiana Pacers and Orlando Magic for the worst record in the league. They are 19th in offensive rating and 26th in defensive rating, a season after ranking 11th and 23rd, respectively, in those categories. Williamson’s ability around the basket is missed in particular: they are 22nd in points in the paint after finishing second in that statistic last year. In 2020-21, Williamson led the NBA with 1,236 points scored in the paint and 20.3 ppg in the paint as well.

Before the season began, the Pelicans expected Williamson to miss at least its first two weeks as he recovered from injury. At media day, Williamson said that after a disappointing 2020-21 season, he wanted to get back to work immediately. He said the injury — a break of the fifth metatarsal bone — may have come from overuse.

The Pelicans lost five of those six games and finished two games out of the final play-in spot for the Western Conference playoffs.