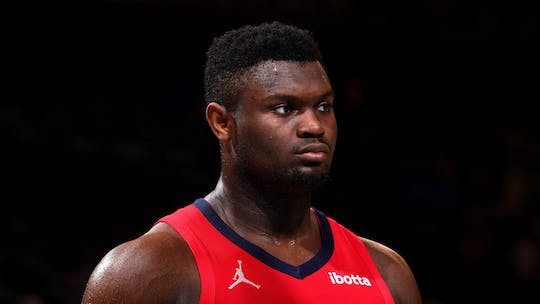 Williamson is slated to have another set of medical tests in two weeks and is not able to play five-on-five right now.

“Zion underwent imaging [Wednesday] on his right foot,” Griffin said. “[Doctors] who reviewed those images were very encouraged by the healing evidence there. They are very optimistic he will recover from this, and they have cleared him to continue his progression. The next step for him now will be running and on-court individual work.”

Williamson had surgery in the offseason to correct a broken right foot he suffered while playing basketball in the offseason. The team announced his injury at media day that Williamson, who averaged 27 points, 7.2 rebounds and 3.7 assists per game in 2020-21, was not expected to play in any of the team’s preseason games.

“Given the nature of bone healing, there is no fixed timeline for his return to game action, but the doctors are very encouraged by this last batch of images,” Griffin said. “As he continues along his return-to-play progression, doctors will be using additional imaging that will take place two to two and a half weeks from now, as guides and landmarks for taking the next steps. It’s everyone’s goal that Zion return to play as soon as is safely possible.”

At media day, Williamson said that after a disappointing 2020-21 season, he wanted to get back to work immediately. He said the injury — a break of the fifth metatarsal bone — may have come from overuse.

“If you know me, I want to win,” Williamson said last month. “Not making the playoffs two years in a row, I’ve got to go do something about it. So I was in the lab, honing my craft, getting after it.”

Pelicans coach Willie Green told reporters in late September he was hopeful Williamson could play in the season-opener on Oct. 20 vs. Philadelphia.